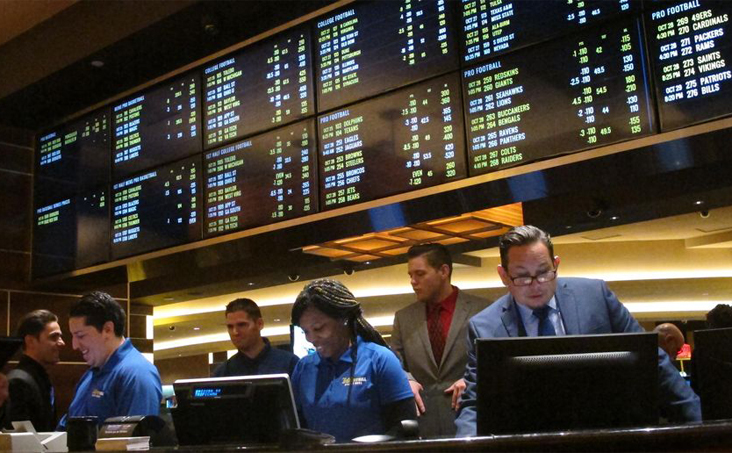 Virginia has no brick-and-mortar casinos but that’s an advantage, according to state Del. Mark Sickles (l.), who wants sports betting to be allowed at Colonial Downs racetrack and off-track betting sites, plus online and via smartphones. Sickles’ legislation would require a $250,000 sports betting application fee and a 15 percent tax on adjusted gross revenue.

Virginia state Del. Mark Sickles introduced the sports betting bill HB 1638 in November. The fact that Virginia has no casinos is a plus, he said. “We have one racetrack, Colonial Downs, in the state. They could get a license under my bill and they do have 10 or 11 off-track betting locations across the state. But I’d like this to work on the iPhone,” Sickles said.

He commented he prefers mobile and online sports betting because he does not want Virginia taxpayers to have to invest in infrastructure, nor does he want casinos popping up throughout the state.

Sickles said the state could become known as a mobile and interactive sports betting destination, with the revenue used to help rebuild the state. “Our lottery in Virginia does about $2 billion of business a year, and the state gets $600 million in net revenue, that’s pretty good. Sports betting would not have that. But the money would go into research projects and an economic transformation in the state. We need to become a well-rounded economy,” he said.

Under Sickles’ proposal, the Virginia Lottery would regulate sports betting. His bill would require a $250,000 application fee for a sports betting license with a $200,000 renewal every three years, plus a 15 percent tax on adjusted gross revenue and a cap on the number of permits that could be issued, although he recently said he’ll propose an amendment raising that limit from five to 10 licenses.

“I’ve been prevailed upon to increase it. Why limit it? The idea was to give the lottery board the maximum amount of revenue for the state. Initially, the theory was that if you have too many, you might dilute the amount of money the state can make. So, there is some argument for exclusivity. And even under the five, each applicant could have two skins. But upping the number to 10 will be the first amendment,” Sickles said.

He added he’s not firm on the application fee or 15 percent tax rate, which ranks in the middle of tax rates in states that have legal sports betting. The highest is Rhode Island’s 51 percent, with New Jersey at 13 percent for mobile sports betting and 9.75 percent at sports books, Mississippi at 8 percent and West Virginia at 10 percent.

Sickles said, “There is a chance, even though there is widespread support for legalized sports betting, that Speaker Williams James Howell may call for a 1-year moratorium.” He explained the legislature may want to resolve two issues before moving forward on sports betting. First, the Pamunkey Tribe announced it will pursue a casino, possibly in Norfolk; the state and the tribe would need to negotiate a gaming compact. Second, some legislators are promoting a $250 million casino in Bristol.

Regarding that casino, state regulators recently denied Dharm Pharmaceuticals’ request to move a medical cannabis facility approved for Bristol, leaving the dispensary in the same building as the proposed casino resort in the former Bristol Mall. The state approved the mall building as a dispensary location; the legislature and Bristol voters would have to approve the casino.

The pharmacy board approved the mall location in September, granting to Dharma one of five state licenses out of 51 applicants. In a 4-3 vote, the board rejected the location change, noting allowing a winning company to change its business plan after the competition would be unfair to other applicants.

Bristol City Manager Randall Eads said his city will try to make both projects work. “We’ll figure it out,” he said.