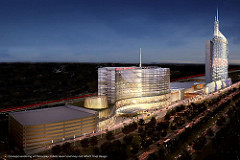 Revolutionary Racing and Peninsula Pacific Gaming recently finalized their purchase of Colonia Downs in New Kent, Virginia from Jacobs Entertainment for “in excess of $20 million,” according to a statement. The deal was made possible following the passage of legislation allowing historic racing machines at the racetrack and up to 10 off-track betting facilities throughout the state. Officials said the racetrack may reopen in 2019.

Larry Lucas, chairman of Chicago-based Revolutionary Racing, said, “We are thrilled to take yet another important step forward in the effort to help revitalize Virginia’s longstanding horse industry. A vibrant and successful Colonial Downs is critical to ensuring that horse racing can thrive and grow in the Commonwealth.”

Colonial Downs opened in 1997. The last live horserace was run there in 2013, when Jacobs Entertainment voluntarily surrendered its license after failing to reach an agreement about race dates with local horsemen. For years, Jacobs unsuccessfully lobbied the legislature for authorization to offer slot machines or other casino games at the track.

VanClief said the commission will review historical racing regulations in Kentucky and other states where it’s allowed, and hopefully have Virginia’s regulations ready for approval when the new law takes effect in July.

About 12 miles from Colonial Downs in New Kent County, the Pamunkey Indian Tribe announced it may build a $700 million casino resort on 600 acres purchased for $3.05 billion by hedge fund billionaire Jon Yarbrough. The tribe, which has a reservation in King William County, was federally recognized in 2015 after a 33-year effort. Tribal officials said other sites also are being considered.

Wherever the Pamunkey tribe decides to locate its casino, the land must be taken into trust by the federal Bureau of Indian Affairs and the tribe must enter into a gambling compact with the state. Pamunkey Chief Robert Gray noted the New Kent County land was priced right. “Let’s grab this before someone else does because it might prove as a viable location for a casino resort,” he said.

According to the tribe, the casino resort would include a 1,200-room hotel, concert venue and numerous dining options. Gray said the Pamunkeys also hope to acquire land for a health center, tribal offices, housing and a tribal museum. “Our young people need educational and job opportunities and our older tribe members need better access to health care and housing, and this is not something we intend to wait five years for. For us the future is now and we will make every effort and bring whatever resources are necessary to make it happen,” Gray said.

MGM National Harbor casino opened across the Potomac River in Maryland. A Northam spokesman said the governor is “open to a conversation about keeping that revenue in the commonwealth.”