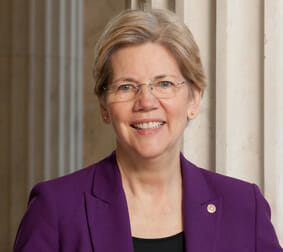 The Gambling Addiction Prevention Act of 2019, filed by U.S. Senators Elizabeth Warren (l.) of Massachusetts and David Daines of Montana would require the Department of Defense to offer treatment services to active-duty service members with gambling problems. By one estimate, 56,000 active-duty service people have gambling disorders.

U.S. Senators Elizabeth Warren of Massachusetts and David Daines of Montana recently filed a bill that would require the Department of Defense to develop programs to treat active-duty service members with gambling addiction.

Under the measure, called the Gambling Addiction Prevention Act of 2019, the department would update its mental health regulations to include gambling disorder and offer resources about where service members can get treatment.

Warren said, “It’s our duty as Americans to honor the sacrifices service members and veterans make for our country. Senator Daines and I are reintroducing our bipartisan legislation to make sure veterans struggling with gambling addiction can get the treatment they need.”

The proposed bill would require the department to add the words “gaming disorder” to its behavioral health regulations and guidance and make facilities raise awareness about gambling disorder and treatment options. The bill requires any facility offering gambling to include educational materials, a list of resources where service members can get help and protocols that encourage responsible gaming. The bill also calls for the Secretary of Defense to submit a progress report to the congressional defense committees.

An anti-gaming advocate, Warren said more than 3,000 slot machines at U.S. military bases abroad took in $100 million last year, at service members’ expense. She has asked the GAO to release its report about gambling problems among service members.

The report indicated that, despite the number of slots at U.S. military bases, the agency did not screen service members for gambling disorders. It also said less than 10 percent of servicemen and women with gambling problems seek help due to shame or misunderstanding of gambling disorder, defined by the military as a health and financial issue as well as a national security concern.

National Council on Problem Gambling Executive Director Kevin Whyte said, “I applaud Senators Daines and Warren for taking the lead on the GAP Act to address problem gambling in the military. NCPG believes there exists an ethical and economic obligation to protect our troops by preventing gambling addiction.”

Daines noted, “Far too many service men and women suffer from gambling addictions. This bill protects our troops by requiring the Defense Department to confront this growing problem head on.”