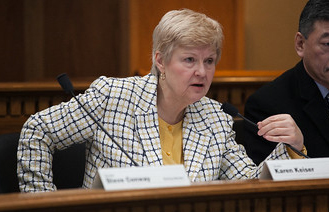 Washington lawmakers are close to approving sports betting for the state’s gaming tribes. But opposition is growing to a bill that doesn’t provide for mobile sportsbooks and leaves out 44 non-tribal card clubs. Senator Karen Keiser (l.) says limiting the wagers to tribal casinos will slow the expansion of gambling.

A bill in the Washington legislature to limit sports betting to Indian gaming tribes—without any mobile sports betting option—has sparked protests from the groups that would be left out: the 44 commercial casinos along with a threat by the state’s largest card room casino owner to sue.

The bill has moved forward to the Senate Ways and Means Committee after being passed by the Senate Committee on Labor & Commence last week. A parallel bill was already passed by House on an 83-14 vote several weeks ago. If it passes the Senate it would require the signature of Governor Jay Inslee to become law. The legislative session ends March 12.

During the debate on the bill, the biggest concerns that came up were about problem gambling and wagering by minors. Senator Karen Keiser, chairwoman of the Labor & Commerce Committee, commented, “Gambling brings with it the threat of addiction and corruption. That’s why it’s wise for our state to take a very small first step and work with our trusted partners who have shown their ability to contain the problem of addiction and thwart the threat of corruption.”

Under questioning by other senators, Keiser added that limiting sports betting to tribal casinos would slow down the expansion of gambling and control the size of the market. She said, “It seemed that my colleagues on both sides of the aisles were really concerned about the expansion of gambling. This was a good middle path, a narrow path to take this on, to investigate it and see how the citizens of Washington react to that.” She argued that it was “very wise of us to take a very small first step in moving forward with the ability to have sports gambling.”

Senator Rebecca Saldana, who also serves on the committee, told Sports Handle, “Protecting consumers is critical, and our approach is about integrity and intentionality about how we allow sports betting in Washington.” She added, “With sports betting activities only at tribes’ brick and mortar facilities, they will be doubly regulated — internally by the tribes as well as by the state Gambling Commission.”

Senator Maureen Walsh, who voted against the bill, declared, “I find it very disappointing that we can’t just open this up to the state. I think the state could use the infusion of revenue. I think also what’s good for the goose is good for the gander. … I think this is terrible. If the argument is the tribes can do it better, then I’m not buying it.”

Opposition to the bill is being led by Maverick Gaming LLC, whose CEO Eric Persson purchased more than a dozen card clubs last year, making Maverick the largest card club owner in the state with 19 total. Persson argues that excluding his casinos is unfair. A spokesperson for Maverick told lawmakers, “We cannot fathom why there needs to be a monopoly provided on a system to bet on sports. This proposal has no inclusivity, no tax revenue and no public voice.”

Asked by Legal Sports Report if he would be filing a lawsuit if the bill is passed, Persson answered, “Of course.”

An amendment to the bill offered two weeks ago includes a section that would fast-track sports betting and earmark $6 million to the Washington State Gambling Commission’s revolving account; for investigations. The amendment states: “The gambling commission may expend from the gambling revolving account from moneys attributable to the appropriation in this section solely for enforcement actions in the illicit market for sports wagering.”

Washington has a large number of tribal casinos: 29. The bill would allow the tribes to renegotiate their tribal state gaming compacts with the state.