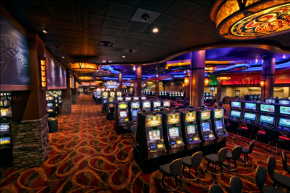 Muckleshoot Casino in Auburn, Washington, is launching a new online gambling app that players can access from anywhere—but, they have to be on-site to purchase games or cash in their winnings.

The casino is working with Playport Gaming Systems on the new app, according to GeekWire.

Starting this fall, players can purchase games, like bingo and others where players don’t compete against the house. Games can be played and wagers can be placed from smartphones, and players have the chance to win real money.

The transactions—game purchases and winnings collection—just have to be done on-site at the casino, which is about 30 miles southeast from Seattle.

Several gaming companies are involved in lawsuits in Washington state courts that are related to their online casino-style games. Even though none of the companies offer real-money betting online, the lawsuits say they are violating state gambling laws, which are considered some of the strictest in the country.

The Muckleshoot app focuses on bingo-style games, which are classified as Class II under federal regulations and fall under federal and tribal oversight, rather than the state of Washington, Muckleshoot’s general manager Conrad Granito told GeekWire.