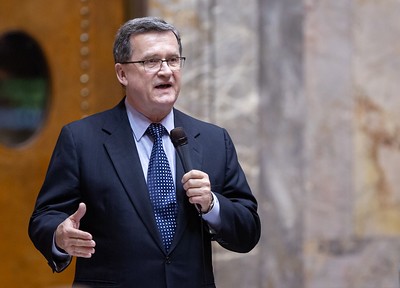 A pair of competing bills to bring sports betting to Washington are under discussion in the state Senate. The biggest difference between the two is who gets to offer wagering. SB 6394 limits betting to tribal casinos. SB 6277 includes card rooms, race tracks and tribal casinos—and permits online bets.

Folks on both sides of the issue spoke before a Senate committee on January 30. Chris Reykdal, the state school superintendent, told the Labor and Commerce Committee he opposed online sports betting because it would be irresistible to children. “I oppose any bill that opens gambling to the populace by online means,” Reykdal said.

But Eric Persson, owner of Maverick Gaming, which owns 19 card rooms statewide, said people in Washington are already illegally betting on sports, with bookies and offshore companies. He also argued that the state stands to reap tens of millions of dollars a year in tax revenues from online sports gambling.

“Sports gambling is going on in this state right now,” said state Senator Curtis King, sponsor of SB 6277. “I believe it needs to be controlled by the state.”

Maverick employees testified that the company provides lots of family-wage jobs in the state and that sports betting would provide even more. Some tribal representatives spoke against adding card rooms to the venues for sports gambling, saying those are private businesses that don’t provide widespread benefits to state residents.

Chris Masse, a consultant to the tribes, also contended the citizens of Washington wanted a conservative approach to gambling, limited to brick-and-mortar buildings, instead of via mobile phones or computers.

“We are completely different from the Mavericks of the world,” said Jerry Allen, who runs the 7 Cedars Resort tribal casino for the Jamestown S’Kallam Tribe.

“Tribal gaming isn’t just about tribe,” said David Bean, chairman of the Puyallup Tribe and vice chairman of National Indian Gaming Association. “The way gaming runs today, it benefits our neighbors, too. Tribal casinos account for 55,000 jobs in Washington State. Our casinos are safe where you can come and bet in highly regulated environments.”

Said King, “But why can’t we do the same things with the same controls in non-tribal card rooms?”

Kevin Zenishek, the executive director of casino operations for the Northern Quest Casino, owned and run by the Kalispel tribe, said he feels positive about the tribal-only bill. “I would say that Maverick Gaming is taking money out of the state and that is their goal. We keep the money in the state and help the local economy thrive.”

Rebecca Kaldor, the executive director of the Washington Indian Gaming Association, said Indian casinos pay $1.5 billion a year in wages and benefits, pay $722 million in taxes and are worth $5.7 billion to the state’s economy.

On the other side, Persson says the situation is moving as anticipated from a Maverick perspective. “The biggest thing coming from our side is an awareness of Maverick. The awareness level was very low coming in. It’s a short session and I think that neither bill is going to pass. I think going forward we’ll work together and come to an agreement,” he told SportsHandle.com.

The House has a version which would also prohibit online betting as well as games played by universities in Washington.

The bill is an attempt to “figure out a slow and steady way to kind of enter into this new arena of gambling,” House Commerce and Gaming Committee Chairman Strom Peterson, the sponsor, said January 27 at its hearing. “It’s incumbent on us to find the best way forward.”

According to the Spokane Spokesman-Review, Peterson said the prohibition on in-state colleges is an attempt to uphold the integrity of college sports, where young athletes may be more susceptible to pressure and bribery. But he admits it could create some problems with big events, like the Apple Cup or basketball’s NCAA Tournament if Washington teams make the tourney.

“These are some interesting conversations we’re going to have to have,” he said.

Representatives of the horse racing industry also testified, saying race tracks should be allowed to offer sports betting as well.

Patrick Lepley of the Washington Horsemen’s Benevolent and Protective Association said sports betting is legal at horse tracks in most states. He added the race tracks support sports betting in tribal casinos, also, but not at private card rooms.