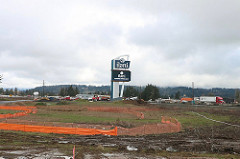 Washington residents have been closely watching a 100-foot-tall electronic billboard along Interstate 5 that is promising soon to announce the opening date for the Cowlitz Indian Tribe’s Ilani Casino Resort near La Center. Perhaps as soon as two weeks. The attraction is expected to welcome 4.5 million visitors a year.

It will have about 2,500 slot machines, 75 table games offering blackjack, roulette, craps and a half dozen others that were chosen after marketing research of the locals.

According to Kara Fox-LaRose, president and general manager of the casino, who was interviewed last week by the Columbian, “We’re in early March and we’re planning on mid-April. It’s amazing to see the progress made to date.”

The $510 million casino broke ground in January 2016. The structure housing the 368,000 square feet of gaming space is nearly complete. The Interstate 5 freeway exchange that will serve the casino is also nearing completion. The construction included a four-lane overpass with two roundabouts at either end. The casino will not open until it is completed, says Fox-LaRose, but that is expected by April 1.

The facility is a joint project of the tribe and its partner, the Mohegan tribe of Connecticut, owners of the Mohegan Sun. On opening day, it is expected to have 1,000 employees, of which 200 are on board, with the balance hired but being trained in such skills as dealing. Others will be added on later.

Fox-LaRose told the Columbian, “We have several team members in every department at this point working on standard operating procedures and internal controls. We’ve started training already. There is representation in every department.”

The casino is in the midst of a concourse that will encircle it and encompass retail and a dozen restaurant outlets, which are also filling their employment rosters. None of these tenants have been announced yet.

Although most of the gaming area will be smoking, the casino is sensitive to the fact that most public facilities in Washington are non-smoking and the vast majority of the indoor areas that are non-gaming are non-smoking and the areas where cigarettes are allowed are served by a state of the art ventilation system. The casino is on the reservation where state smoking laws do not apply.

The casino will eventually have 17,000 SF convention center, but that won’t open until the autumn.