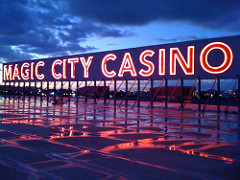 The Florida Division of Pari-Mutuel Wagering, part of the Department of Business and Professional Regulation that oversees gambling, recently issued a summer jai-alai permit for West Flagler Associates to develop and operate a jai-alai fronton, card room and restaurant in the Edgewater area, north of Miami. West Flagler is negotiating with Crescent Heights, which owns most of the block at 3000 Biscayne, to lease the lot and construct a new building.

West Flagler Associates Vice President of Political Affairs Isadore Havenick said, “We’ve just been waiting for a year and a half for the state to decide what to do. We see it as just another entertainment offering in the Miami area. We’re very happy and looking forward to employing people and creating someplace new in downtown Miami.”

The summer jai-alai permit limits wagering on jai-alai games between May and November. Poker games may be offered after the first jai-alai game is played. Havenick said in the off-season the facility will feature comedy performances and concerts. The venue will create 300-500 jobs, he said.

Meanwhile, several Miami business and cultural leaders voiced their opposition to the Edgewater gaming facility, stating they have lawyers researching state and local laws in an attempt to stop the development. Critics said it would be a blow to the groups that have worked hard for years transforming once seedy areas into a thriving cultural and residential center.

Miami Design District developer Craig Robins said, “This will just lower the bar dramatically. It will do for that area what the sleazy bars and clubs did for Ocean Drive. It will bring the whole area down. It’s a disgraceful idea.”

Alberto Ibarguen, president of the Knight Foundation, which has invested millions of dollars in cultural and entrepreneurship programs in downtown Miami, commented, “It’s hard to imagine making a worse mistake. Miami’s ascent as a global, 21st Century city has been nothing short of remarkable. Why should we agree to cheapen that?”

Jorge Perez, chairman and chief executive officer at the Related Group development company, stated, “I will do anything that is in my power to oppose this and block this and kill this. Miami has grown beautifully in the past two decades into a real city where culture is thriving. Neighborhoods and downtown are getting filled with young people and families. It’s getting filled with art and businesses. Casino gambling in any form in the downtown area would be horrendous. I just need to find out who is responsible for this, so we can mount an attack.”

Perez added, “It would be very sad to see that two families with established roots in Miami would damage this community in such a way for what is financial gain. It would seem to me to absolutely absurd.”

Havenick said he expected some negative reaction to the gaming facility and plans to contact opponents to “alleviate their concerns.” He said, “As a resident of that neighborhood, I don’t believe it’s a bad thing for the neighborhood. “This will be a good attraction. It is not going to be anything more than poker and jai alai. We’ve said that all along. It is not a casino. It’s simply poker in an area that has many other forms of entertainment, and this is another form of that. To come out against a project before you know all the details is fairly shortsighted.”