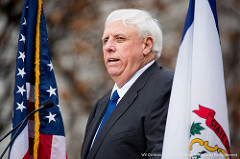 The new law allows sports betting at West Virginia’s five licensed casinos and on Lottery Commission-approved mobile device applications. The state would charge casinos a $100,000 licensing fee and impose a tax of 10 percent on gross receipts after the first $15 million and direct the rest to the Public Employees Insurance Agency. Bettors would have to be at least 21.

The measure’s sponsor, Delegate Shawn Fluharty, said, “As long as you are in the state of West Virginia, you have an account and you are 21 or older, you can place a bet. That’s how it is going to operate. So I think it is going to be a great indirect revenue stream for all of our local bars and restaurants and casinos.” He added sports betting will draw residents of neighboring states to West Virginia to place bets on sporting events.

The legislation does not include the 1 percent integrity fee sought by the National Basketball Association and Major League Baseball. However, Justice said if the federal ban is lifted, he might call a special session to modify the newly passed law, including a 0.25 percent fee. Justice’s family owns Greenbrier Resort whose casino would be authorized to operate sports betting under the bill. “I believe there could be real value to this partnership. This approach will allow us to develop a relationship with all the major sports leagues so that it is beneficial to everyone,” Justice said. He added, “Ohio hasn’t started on this legislation and Pennsylvania takes too big of a cut, so if the U.S. Supreme Court legalizes sports betting, we will have an advantage over surrounding states.”

Furthermore, Justice stated, “I personally believe there’s a benefit to partnering with the major leagues and that there’s some cleanup work to be done. I really believe that partnership with the major leagues is something we should look at and maybe make it a model legislation the whole country could use.” He said the quarter-percent integrity fee, which was introduced in New York, “is not a lot of money to tell you the truth, and the casinos surely ought to be able to afford that.”

Analysts said the 1 percent integrity fee actually would direct 20 percent of the handle for sports book operators to the leagues.

Justice’s Chief of Staff Mike Hall said Justice is aware that lawmakers d not approve of the integrity fee. “There’s not a lot of legislative support right now for doing that. We’re one of the early states to do this, so major league teams came in and said, ‘We’re going to be doing this in other states so let’s see what happens and we join the party.’ The governor wanted to assure them in his conversation with him that we have not just shoved them aside.”

In Kansas, a House committee heard testimony on a bill allowing the

In Missouri, SB 767, a video gaming bill, was amended to address how existing casinos would handle sports betting in Missouri, such as where sports books could be located within existing facilities, the security and storage of revenue and the process of applying for a license. In addition, the amendment specifies a $10,000 application fee and a $5,000 annual renewal fee, plus a tax rate of 12 percent on gross sports wagering revenue and a 2 percent administrative fee. Casino operators testified in late February that they would support a bill with similar language. The amended bill does not include the 1 percent integrity fee.

And in Louisiana, state Senator Danny Martiny sponsored SB266 which would allow sports betting, regulated by the Louisiana Gaming Control Board. “I think there is a good chance that we would consider sports book betting because I’m going to tell you Beau Rivage and all those Mississippi casinos, they already approved it and that will cut into the New Orleans market. Arkansas is also looking to approve the same and cut into the Shreveport market.”

If the bill becomes law, voters in each parish would decide whether or not to make it legal there. Martiny noted, “I think a lot of people who were dead set against it on a moral basis now look at it from the standpoint of, well I’m not going to do it. But if these people want to waste their money doing it, I’d rather take their gambling revenue, rather than raise my sales tax or do away with my excess itemized deductions or compressed the income tax brackets so that we can raise money, all of which have been rejected during the last special session.”

In New York, Senate Bill 7900, introduced March 7 by Orange County Republican John Bonacic and currently before the Senate Finance Committee, does a lot of things right, say those who favor a regulated New York sports betting market in one shape or another.

Mainly, it establishes rules for New York’s four new commercial casinos—del Lago Resort and Casino in the Finger Lakes, Rivers Casino & Resort in Schenectady, Tioga Downs Casino in the Southern Tier and Resorts World Catskills near Monticello—to exercise provisions in their licenses allowing them to take bets on sports both on-site and by computer and mobile phone.

Significantly, it also cuts the state’s racetracks, racinos and OTBs into the action by allowing them to partner with the casinos in offering affiliate betting stations and registration for their patrons to access the online and remote platforms