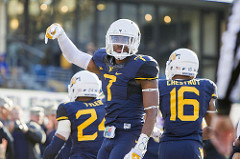 Over the weekend, former NFL player Joe Theismann helped kick off the grand opening ceremonies at the casino, where gamblers bet more than $600,000 over the first full weekend of legalized sports wagering—including $340,000 bet on the first Saturday of college football season, according to the West Virginia Lottery.

Hollywood Casino Vice President of Racing Operations and Sports Erich Zimny said, “It’s going well. This past weekend college football was the big thing.” Most bets were placed on the West Virginia vs. Tennessee matchup, he said.

West Virginia was the first state to legalize sports betting, in March 2018, and became the fifth state to allow it after the U.S. Supreme Court lifted the federal ban in May. Delaware was the first state to legalize sports wagering in mid-June, followed by New Jersey and Mississippi. Pennsylvania and Rhode Island also offer legal sports betting. Pennsylvania approved its temporary regulations in August and hasn’t yet approved any sports betting licenses. Rhode Island sportsbooks are expected to launch later this fall.

Penn National Gaming, owner of Hollywood Casino, received its interim sports betting permit from the West Virginia Lottery, good for 270 days, in August. It will pay $100,000 for state sports betting license, and the state will tax 10 percent of the adjusted gross receipts. Penn National has partnered with William Hill to operate the casino’s sports betting across all channels. William Hill also operates sportsbooks in Delaware, New Jersey and Mississippi.

Systems checks are occurring now at the Greenbrier, where FanDuel Sportsbook received an interim permit to provide retail and online/mobile sports betting. DraftKings Sportsbook also has received an interim license but it hasn’t finalized a deal with a casino partner yet. Under the new sports betting law, operators may form up to three partnerships.

Wheeling Island and Mardi Gras casinos are both owned by Delaware North which also has secured its interim license. Mountaineer Casino has not applied for a sports betting license yet, but regulators said they’re expecting paperwork from owner Eldorado Resorts soon. Eldorado has an existing relationship with William Hill in other markets.

Meanwhile, in a surprise move, West Virginia Lottery Commission Director Alan Larrick resigned effective September 1. He was appointed by Governor Jim Justice in January 2017. “There is no question he has done an excellent job and he will be missed,” Justice said.

Larrick’s resignation was a surprise to all. At the state Department of Revenue, which oversees the Lottery Commission, Kathy Torlone, an executive assistant to Secretary Dave Hardy, said, “I had not heard that, I had no idea. Nobody in this office had heard anything.”