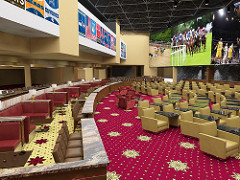 Westgate Resorts, owner of the Westgate Las Vegas, plans to parlay the success of the property’s SuperBook sports book into a national brand, selling its experience and expertise to gaming operators in jurisdictions that are joining or planning to join the newly legal U.S. sports betting market.

SuperBook, as the brand will separately be known, is being spun off by Westgate and Westgate Las Vegas operator Paragon Gaming as a separate joint venture “decoupling it” from its off-Strip home, in the words of Paragon COO Rob Oseland, “so it can stand on its own in other markets and compete for market share.”

As famed bookmaker Jay Kornegay, who has run SuperBook since 2004, described it, the idea is to operate, manage and assume the risk for new sports book operations. He called it, “the natural next step in the evolution of our industry”.

Since May, when the U.S. Supreme Court struck down a decades-old federal ban on sports betting, states have begun lining up to compete for their share of a fledgling industry with the potential to be worth $10 billion or more annually, according to experts. Delaware, New Jersey, Mississippi and West Virginia have already legalized. Pennsylvania and Rhode Island are expected to tumble this fall. Another dozen states are considering it.

Established operators such as William Hill US and Fan Duel have seized on the opportunity to manage books at several properties in these emerging markets.

SuperBook, which has been taking bets since 1986, when the Westgate was the Las Vegas Hilton, doesn’t plan to be left behind.

Built at a cost of $17 million