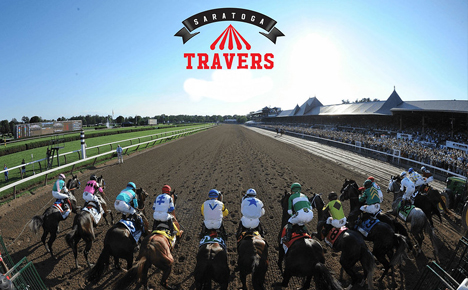 As tempting as it is to anoint Essential Quality the weekend’s Travers Stakes champ—and it’s very tempting, given the field—hold your horses.

It’s tempting to declare Essential Quality the winner of this weekend’s Travers Stakes at Saratoga, given the rest of the field and his deserved 4-5 morning-line odds.

But based on history, betting the favorite to win may be premature.

Then there was Golden Ticket in 2012, setting the long-shot Travers standard for the century, going off at 33.50-1 and finishing in a dead heat with 2.40-1 favorite Alpha. 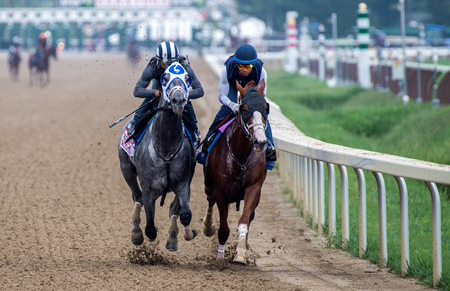 You get the idea. Eight times since 2010, the Travers winner came home with odds of 6-1 or greater. This is a race anyone can win. A race where any running style plays, depending on the field dynamics. Horses can go gate-to-wire. They can also come from deep in the clouds and all points in between.

The Travers headlines the biggest day of racing on Saratoga’s summer card. It’s one of six Grade 1s on Saturday’s card, one featuring some of the biggest names in Thoroughbred racing, including the Belmont Stakes champion Essential Quality.

But you also get Champion Female Sprinter Gamine in the Ballerina. You get Champion Male Sprinter Whitmore in the Forego. You get 3-year-old one-turn stars Jackie’s Warrior, Drain the Clock and Life Is Good, who returns for the first time since March in the H. Allen Jerkens Memorial. Life Is Good was 3-for-3 running for Bob Baffert and was the Kentucky Derby futures favorite before injuring his ankle. He was moved to Todd Pletcher’s barn in the spring.

And you get turf stars Channel Maker, Gufo and Tribhuvan in the Sword Dancer. All of this illustrates the biggest racing card since June 5’s Belmont Stakes card and the biggest card until the November 5-6 Breeders’ Cup.

Get a $25 bonus bet match when you bet at least $25 on your new BetAmerica account!

Anchoring the biggest day of racing at Saratoga is the Travers, one of the foremost 3-year-old races in the world. The 10-furlong test is often seen as a goal of Triple Crown runners coming out of the spring. First run in 1864, it gets its name from William Travers, president of the Saratoga Racing Association and owner of the first winning horse: Kentucky.

Essential Quality casts a giant shadow over the six other horses in this field. His career-best 109 Beyer Speed Figure from his electric Belmont Stakes win is 11 points better than his closest pursuer: Masqueparade’s 98 from his Ohio Derby victory.

This is a colt at the peak of his powers. Just this year, he’s won at 8 ½ furlongs, nine furlongs and 12 furlongs. He’s a length shy of winning at 10 furlongs—the only hiccup on Essential Quality’s resume coming in that Kentucky Derby fourth-place finish. Essential Quality’s versatile running style fits the profile of a Travers winner, even if his favored status doesn’t.

Sign up to bet at TwinSpires, and you’re eligible for bonus of up to $200. Get started today!

So if you want to beat this prohibitive favorite and cast your lot with one of the scrappy underdogs, where do you start? Well, with the proverbial scrappy horse: Midnight Bourbon (9-2). He returns after his near-disaster escapade in the Haskell Stakes last month, when Hot Rod Charlie cut him off, clipped his heels and sent the son of Tiznow sprawling.

That sixth-place finish was one of two times in 10 races Midnight Bourbon failed to hit the board (2-3-3). The other was his respectable sixth in the Kentucky Derby cavalry charge. He’s a quality, game colt who leaves everything on the track. Unfortunately, Midnight Bourbon’s best isn’t often good enough. He’s won once in 2021, coming in the Grade 3 Lecomte back in January.

That brings us to two intriguing 6-1 contenders: Keepmeinmind and Dynamic One. Both are rounding into form as the year progresses. Keepmeinmind has only one victory, but comes in off a second to Essential Quality in the Jim Dandy, a third in the Ohio Derby and a fourth in the Preakness. In each race, he came hard down the stretch. Even his seventh in the Kentucky Derby was solid, considering he rallied from 19th.

Keepmeinmind fits the profile of a Travers upstart. So does Dynamic One, who captured his first stakes victory earlier this month in the Curlin. He rallied from seventh and last in the backstretch to win by nearly two lengths. A slow developer, Dynamic One needed four tries to break his maiden. And put aside his troubled 18th in the Kentucky Derby, where, like many horses, he found the traffic and pace not to his liking. The son of 2012 Belmont Stakes champion Union Rags has the pedigree to handle 1¼ miles and the temperament to keep grinding.

Then there’s Masqueparade (8-1). The Ohio Derby winner first opened eyes when he bludgeoned a Churchill Downs allowance field on the Kentucky Derby undercard by nearly 12 lengths. Eyebrows went up with his gritty, half-length Ohio Derby victory, where he turned back fellow Travers foes Keepmeinmind and King Fury.

Keepmeinmind turned the tables in the Jim Dandy, reeling in Masqueparade in mid-stretch. The son of Upstart did finish less than three lengths behind Essential Quality in the Jim Dandy. He has the speed to run with everyone in the field, and like almost everyone in the field not named Essential Quality, can seamlessly hit the board. Another late upstart, Masqueparade is 3-0-2 in six starts this year.

This year’s Travers may seem like a one-horse race. After all, all Essential Quality does is win races any way he can. But there’s enough intrigue and variety to make horseplayers grind a bit, seeking alternatives on both the vertical and horizontal wager fronts.

The Breeders’ Cup, one of Thoroughbred racing’s most prestigious international events, is giving race fans a chance to attend the Breeders’ Cup World Championships, November 5-6 at Del Mar Racetrack in Del Mar, California.

Out of all entries, one fan will be selected at random to win an all-expenses paid trip for two to this year’s World Championships. In addition to premium tickets in the exclusive Trophy Lounge chalet, the grand prize includes roundtrip airfare, hotel accommodations, a private tour of Del Mar racetrack, access to the paddock where the winner will give the Riders Up call for a championship race, and VIP access to a concert after racing concludes on Saturday.

The contest is open from now until 11:59 p.m. ET on September 12. To enter, fans must be 21 years of age or older, live in the United States or Canada (excluding Quebec).

Register for free online at BreedersCup.com/Contest.

One lucky winner will be selected at random on or before September 15 to receive the grand prize and attend the 2021 Breeders’ Cup World Championships, with 14 races featuring top horses, trainers and jockeys from around the world.