Will Justify take the Triple Crown? 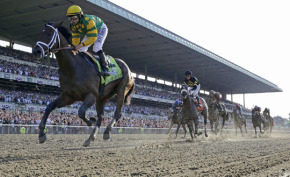 How big is half a length? Monumental. Nobody enjoyed the thrilling Preakness Stakes finish more than officials at Belmont Park.

The New York track scored an exhilarating lead-up to its June 9 Belmont Stakes, the final leg of thoroughbred racing’s Triple Crown, with Justify’s razor-thin, half-a-length victory in the Preakness. Justify’s chance for a rare Triple Crown sweep gave Belmont a three-week glow to bask in its potential. Only 12 horses have captured all three events, in a trilogy dating back to 1919. When American Pharoah prevailed in 2015, he snapped a 37-year Triple Crown drought.

The money follows the drama. More than 100,000 spectators witnessed California Chrome’s unsuccessful Triple Crown bid at Belmont in 2014. Attendance was capped at 90,000 and probably would have exceeded it the following year, when American Pharoah won.

In the last two years, however, no Triple Crown possibility reduced attendance to around 60,000 spectators. Betting handle dropped 37 percent from 2015 to 2016. The absence of a Triple Crown chance has measured out at roughly $40 million in reduced handle for the race. Justify’s win may thus become the most lucrative half-length in history.

That’s the risk-reward of this race. The Kentucky Derby thrives on its reputation and drew a record attendance of more than 157,000 people this year. The Preakness gets piggyback benefits, because the Derby winner almost always runs in it.

But the Belmont? Hit or miss. It loses millions of dollars without the Derby and Preakness winner entered. But it reaps incalculable rewards for a Triple Crown try, as the eyes of both the racing world and the casual public elevate the event.

A couple years back, track officials wisely hedged their bet. They bolstered the Belmont with several Grade I races, luring bettors to what would be a mini Breeders’ Cup. It’s the ultimate insurance policy, giving Belmont Park a day of autonomy.

That’s a great backup strategy, now helped by the magic of Justify’s bid. Triple Crown achievements tend to run in streaks. There were three in the 1970s: Secretariat, Seattle Slew and Affirmed—then, a gap of 37 years. Now, there can be two in four years.

For many people, that “Justifies” taking a trip, or taking in the race online. As a bonus that day, Woodbine tosses in the $500,000 Woodbine Oaks.

Some trends: Bad things happen to bad teams. When the Tigers blew a 4-0 lead and lost to the Mariners, they were swept in the series, including a ninth-inning blown save. A bad team that blows a game they should win often suffers a snowball effect. On the flip side, the underachieving Dodgers stole a game from the Nationals with a ninth-inning rally.

That led to a series sweep, and, depending upon when you read this, the looks of a positive run.