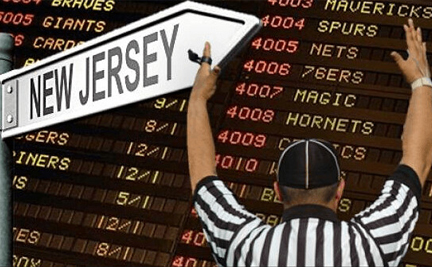 New Jersey is the consistent leader in online sports betting in the U.S. in a market so coveted that an illegal offshore operator is now trying to enter as a legal contender.

In September, New Jersey’s sports betting market generated more than $748 million in bets, leaving August’s tally of $668 million in the dust, and outstripping the previous record of $614 million set in Nevada last November.

Year to date, Atlantic City’s nine land-based casinos and New Jersey’s racetracks have hauled in nearly $3.3 billion in sports bets; according to ESPN, that’s more than Atlantic City used to make each year from its casinos, before sports betting came on the scene.

With that much moolah in play, it’s no wonder most of the major sports betting operators have set up shop in the Garden State. Recently, one more declared its intention to join, if it can pass muster with the state Division of Gaming Enforcement (DGE). There’s just one big problem: the operator in question, 5Dimes, is illegal in the United States.

For a while, that was okay; as one of the larger offshore sportsbooks, founded in 1999 by American bookmaker William Sean Creighton, 5Dimes operated with relative impunity from its base in the Caribbean. It usually made more money than legal sportsbooks in the U.S., and it paid no taxes. 5Dimes claimed to offer players a “unique online gaming experience with sport betting” long before those activities were legally available in the U.S.

And this is now. In 2018, thanks to a court case known as Murphy v. NCAA, New Jersey won its battle to introduce legal online sports betting. In May of that year, the U.S. Supreme Court struck down the Professional and Amateur Sports Protection Act (PASPA) of 1992, and the race was on. Witnessing the gold rush in New Jersey, other states have jumped on the bandwagon. And with the economic crunch caused by Covid-19, even states that once resisted mobile sportsbooks are now interested; by some estimates, 40 states are on track to legalize the wagers, joining 14 that are already live or pending.

Lured by the growing industry, 5D hopes to go legit, starting in New Jersey. But first, the company has to get past the DGE, the super-strict gatekeepers who issue licenses in the state. 5D comes with plenty of baggage and an unsavory history.

In September 2018, Creighton, originally from Virginia, fell victim to a botched kidnapping, and vanished just as he was preparing to plead guilty to money laundering, illegal gambling and fraud. In 2019, authorities identified his remains in an unmarked grave in Costa Rica, where he ran the casino and lived with his wife, Laura Varela.

Varela now owns the sportsbook, which has 1 million gamblers in its database. She enlisted the help of high-powered attorneys in Washington and Philadelphia to help 5D go legal in New Jersey, a steppingstone to other states, and in October agreed to pay $47 million to call off U.S. agents and federal prosecutors in Philly over the money laundering charge.

“The Department of Justice understood,” Varela said of the proceedings. “I felt their sympathy throughout this long process.”

Keep up with online betting news and analysis. Subscribe below, and get iGamingPlayer delivered to your inbox every week.

So, how could such a landmark deal benefit 5Dimes as well as the state of New Jersey, where operators accepted $3 billion in bets to date this year, and paid the state $200 million in taxes?

For one thing, 5Dimes on its own takes in billions of dollars’ worth of bets annually, luring big spenders.

“A U.S. company might have a customer spending $125 or $150 a year on average,” according to Jeff Ifrah, a veteran Washington casino lawyer who also represents Varela. “The Costa Rican books gamblers might spend $1,200 on average per year. They cater to more serious gamblers” and conceivably could help to grow New Jersey’s already record-shattering business.

As part of the settlement, Varela would block U.S. access to 5Dimes’ websites and stop handling U.S. bets, but still take bets from other countries until it can legally launch in New Jersey (still a very big if).

Her lawyers expect it could take several months for an initial response from the state; if approved, the deal could pave the way for other offshore gambling operations to seek legitimacy in the U.S.

This one bears watching.

Take A Spin with the