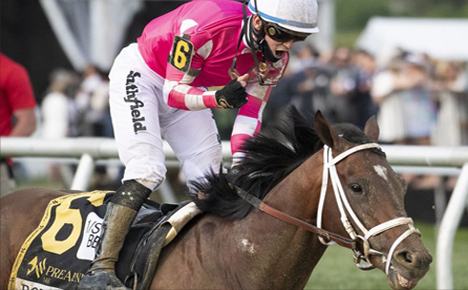 This year’s Triple Crown contest has been one surprise after another—with a little dose of controversy mixed in. Here’s why some oddsmakers have Preakness winner Rombauer also taking the Belmont.

This year’s Triple Crown contest has been nothing but surprises so far. First, Kentucky Derby favorite Essential Quality lost to Medina Spirit. Second, Medina Spirit risked a DQ because of medication. Third, the Ballyhooed Baffert winner lost at the Preakness to also-ran Rombauer.

Now, heading into the Belmont Stakes, some oddsmakers like Rombauer to win there, too. Are they right this time?

First, let’s look at the circumstances that led Rombauer to the Preakness (G1), starting with his 11-1 odds to win the second jewel of the Triple Crown. Rombauer’s owners, John and Diane Fradkin, planned to sell him after he won his maiden debut at Del Mar last July.

But Covid wreaked havoc with 2020 sales. As a result, the Fradkins keep Rombauer and turned him over to trainer Mike McCarthy to race. And here we are. The improbable string of circumstances that gave McCarthy his first Triple Crown training victory and put a boisterous closer in the winner’s circle at Pimlico is a Hollywood ending.

Road to the Preakness

Under Flavien Prat, the West Coast’s best rider and one of the top three or four jockeys in the country, Rombauer pulled off a masterful trip. He let 2-1 favorite Medina Spirit and 3-1 second choice Midnight Bourbon reel off blistering fractions of 23.77 seconds (opening quarter-mile), 46.93 (half-mile) and 1:10.97 (six furlongs).

Until it didn’t. Rombauer roared up the four-path, blowing past Irad Ortiz Jr. and Midnight Bourbon at the eighth pole. The final margin was 3 ½ lengths over Midnight Bourbon, 5 ½ over Medina Spirit and 9 ½ over Keepmeinmind, who completed the superfecta.

“The hole card for this horse is his stamina and his smarts,” McCarthy said. “He has both of those. He will, I think, run as far as they write races. But he has no quit in him. All he knows to do is just run, and he lays it down every time.”

With that, McCarthy acknowledged that Rombauer would head to the Belmont Stakes. The horse shipped to Belmont Park earlier this week, and the Preakness answered whatever lingering distance questions surrounded this Twirling Candy colt. The Belmont’s 1 ½ miles will be no problem.

In fact, oddsmakers already consider 12 furlongs a non-issue here. Some sportsbooks made Rombauer the 4-1 early second choice at Belmont Park, behind 3-1 Essential Quality. The Derby favorite and fourth-place finisher from that race skipped the Preakness, but trainer Brad Cox said he’s possible for the Belmont.

Road to the Belmont 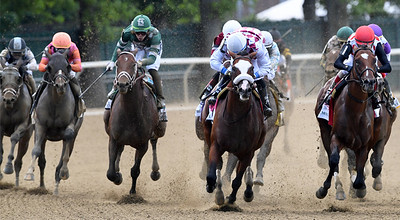 How did Rombauer get to second-favorite status in the Belmont? Last March, the Fradkins had their colt set for the April OBS sale. But bloodstock agent Eddie Woods said the sale probably wasn’t going to happen, due to the pandemic.

So Fradkin kept Rombauer. The plan was to race him, get some wins, and sell him. Rombauer entered a maiden special weight race at Del Mar in late July and won. Fradkin expected the offers to pour in.

It didn’t happen. Del Mar’s new timing system went haywire. Rombauer’s winning mile time of 1:38.30 somehow produced a Beyer Speed Figure of 48. In the Thoroughbred speed figure universe, this is one step above melting glacier and one step below your cat chasing a squirrel. Low-level claiming horses and horses at C- and D-level tracks clock 48 Beyers. Not would-be stakes contenders, much less future Preakness champions.

“Nobody pays big money for a horse that won and received a 48 Beyer,” Fradkin said (later, he discovered Del Mar’s timing system was on the fritz and everyone’s times were off).

So he and McCarthy pushed forward on the race trail. Rombauer finished sixth in the Del Mar Juvenile Turf Stakes. Then he finished a strong second to Get Her Number in the American Pharoah Stakes (G1). Next Rombauer went to Keeneland for the Breeders’ Cup Juvenile, the top juvenile race in the country. There, he finished fifth.

Three months later, McCarthy wanted Rombauer in the Robert B. Lewis Stakes (G3) at Santa Anita. But Fradkin took one look at what likely awaited his colt in the starting gate—Medina Spirit, Roman Centurian, and Hot Rod Charlie—and overruled his trainer.

Because Fradkin likes the path of least resistance. And running against a largely unheralded field at Golden Gate Fields offered far less resistance than what awaited Rombauer in the Lewis starting gate. There, Medina Spirit, Roman Centurian and Hot Rod Charlie came in 1-2-3 in a photo finish.

In all likelihood, at that point of his career, Rombauer would have been looking at the bottom of the superfecta at best. Instead, he went off as the 8-5 El Camino Real favorite.

Now Fradkin and McCarthy had options. Fradkin wanted no part of Bob Baffert’s hammerlock on Santa Anita’s Derby preps. Telling reporters he went in with an “ABB strategy” (“Avoid Bob Baffert”), Fradkin sent Rombauer east to Keeneland, where Essential Quality and Highly Motivated awaited in the Blue Grass Stakes. Those two dueled to the wire, with Essential Quality prevailing by a neck. Rombauer finished third, 6 ½ lengths back.

“I was bullish on running the horse in the Kentucky Derby,” McCarthy said. “Usually on Derby Day, Churchill Downs is hard and fast, and I think that’s what this horse has kind of been wanting all along.”

Fradkin didn’t see the 20-horse, speed-favoring Derby sig alert as a good place for a closer. He especially didn’t see Rombauer coming out of that in any condition to run the Preakness two weeks later. So Rombauer skipped the Derby and won the Preakness.

“You never know where a good horse is going to come from,” added McCarthy. “I’m glad this one landed in our lap. I don’t think the journey is over.”

And so on to the Belmont Stakes.

Get a $200 new-player bonus when you sign up to wager at TwinSpires.com, owned by Churchill Downs Inc.

Prepping for the Belmont