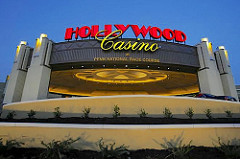 At least a dozen states have enacted or will enact new laws allowing wagering on sports events, if the U.S. Supreme Court lifts the federal ban . One of those states is Indiana, where state Rep. Alan Morrison recently introduced House Bill 1325 that not only would authorize sports wagering at the state’s riverboats, racinos and satellite facilities, but also would give the national sports leagues an “integrity fee” of 1 percent of the handle. The fee would be in addition to a proposed 9.25 percent state tax on gaming revenue plus the existing 0.25 percent federal excise tax on the handle.

Eilers & Krecjik Gaming also estimated the potential windfall for leagues, if 32 states eventually legalize sports betting, from $150-$250 billion in annual handle. “For the sake of round numbers, let’s settle on $200 billion as a possible number for handle across the U.S. down the road. That would mean if the Indiana model is ported to every state, the leagues would stand to realize $2 billion in revenue annually.”

Morrison said he received input on the bill from NBA and Major League Baseball regarding the 1 percent fee. “We’ve certainly had some input and welcomed some advice and language that makes the leagues feel a little bit more comfortable,” Morrison said. Besides the fee, under Morrison’s bill, leagues would be able to determine the types of wagers that are offered and would require operators to use official league data in certain cases.

He said, “While we applaud Rep. Morrison’s efforts to bring legal, transparent sports betting to Indiana, handing sports leagues 20 percent of what’s left over after winnings are paid out, undercuts its economic viability. Doing so will ensure the illegal market continues to thrive in the state, and gut the tax revenues available to fund essential public services. We believe Indiana taxpayers deserve better.”

Freeman said the fee “simply replaces a failed federal prohibition with bad state policy. Our goal is to eliminate the illegal market, protect consumers and strengthen the integrity of the game. We invite all stakeholders to join us in working together in a thoughtful and transparent fashion.”

US Fantasy Sports CEO Vic Salerno, a member of the AGA Gaming Hall of Fame and a U.S. sports betting pioneer says such a tax would doom any legal sports betting industry in the country.

The National Collegiate Athletic Association, based in Indianapolis, is a plaintiff, along with the NBA, Major League Baseball, the NFL and NHL in the suit against New Jersey, which the Supreme Court is expected to decide by July. The NCAA, headquartered in Indianapolis, has not commented on Morrison’s proposal.

The bill does not exempt betting on college sports. In 2016 Indiana was the second state to regulate paid fantasy sports, but, under pressure from the NCAA, college sports were carved out of the legislation. The NCAA states sports betting “has the potential to undermine the integrity of sports contests and jeopardizes the welfare of student-athletes and the intercollegiate athletics community.” The American Gaming Association stated it will oppose any attempts to ban college sports from legal sports betting. The AGA estimated $150 billion is illegally wagered on sports in the U.S. annually.

Morrison said he has not had any recent discussions with the NCAA. “I would like to think moving forward they would have a conversation with us. I am sure that we will at some point, because they see the landscape changing. There’s a conversation still to be had,” he said.

Morrison stressed the “education process is extremely important. Let’s face it, sports wagering is not on the mind of a majority of the legislators in this state or any state. It’s something that some of us are interested in but not most. So there will certainly be an education process, but I do think we can get it done. I have medium to high hopes that we can hopefully get it in committee, and get a hearing and start to make some progress on it.”

Previously, state Senator Jon Ford filed SB 405, which contains the same provisions as Morrison’s House bill except for the integrity fee. Under both bills, sports betting operators would pay an initial fee of $500,000 or 1 percent of revenue, whichever is greater, and an annual administrative fee of $75,000. Adjusted gross receipts on sports wagering would be taxed at 9.25 percent. The measure would direct the state gaming commission to adopt rules and standards for the conduct of sports wagering. It would allow licensed operators to provide mobile and online sports betting and require bettors to be at least 21 years of age.

Casino Association of Indiana President Matt Bell said sports betting won’t bring huge amounts of money to the state but will attract people to casinos. “Its benefit is that it will be driving customers to a property who wouldn’t be there, who will spend incrementally in other ways. That’s where the state will realize a benefit.”

Nonetheless, Freeman believes the momentum is on the side of legal sports betting. Delivering the keynote address at last week’s winter meeting of the National Council of Legislators from Gaming States, Freeman put the odds at about 60-40 that the U.S. Supreme Court will rule for New Jersey in the state’s appeal on the challenge to its sports-betting law, which also challenges the constitutionality of the Professional and Amateur Sports Protection Act (PASPA), the U.S. federal ban on sports betting.

While Freeman expressed confidence that SCOTUS will hold that New Jersey can implement sports betting, he cautioned that there may be caveats, and a partial repeal of PASPA as it applies only to New Jersey is possible. In that case, other states could follow New Jersey’s lead in passing laws to authorize sports betting.

“The issue could move very quickly into each of your states,” Freeman said. “The train is down the tracks. We would be going state by state and we’d be going there quickly.”

Freeman said that regardless of the Supreme Court ruling, PASPA is in trouble, since it is a different world that when the law was passed.

“Everything we deal with in the gaming industry and the world of sports is different than it was in 1992,” Freeman said. “That’s exactly why (PASPA’s) days are numbered.

“We think there’s extraordinary opportunity in that (sports betting) space. This thing is out in the open. It’s become so commonplace today. Everyone has embraced sports betting for what it is. The question is now, how do we tap into this market.”

Should SCOTUS reach a narrow ruling favoring just New Jersey, Freeman said the AGA will work with the U.S. Congress to pass a framework for the states to implement sports betting programs.

“What I’d expect to see happen is minimum standards set at a federal level, and then states would advance like in other forms of gambling,” he said.

Meanwhile, a new report from Eilers & Krejcik Gaming predicts that 18 states will introduce bills to authorize and regulate sports betting this year, with 11 having good chances at passing.

“Assuming a Supreme Court decision or action by Congress permits it, we could see the largest simultaneous expansion of regulated gambling in U.S. history with sports betting in 2018,” said Chris Grove, the Eilers & Krejcik Gaming managing director, in an interview with the Associated Press.

“Sports betting in West Virginia has to happen this session if we are going to have an advantage over other states. We have to take advantage to get in front of this, instead of always being last,” Fluharty said.

In Illinois, state Rep. Lou Lang filed H 4214 which would legalize sports betting. Lang said the bill is a placeholder for now, but it “creates the Legalization and Regulation of Sports Betting Act” and opens the topic to discussion and research.

State Rep. Sara Wojcicki Jimenez countered, “We really shouldn’t be having the revenue drive us.” But she said she’s open to listening.

Jim Henson, director of the Texas Politics Project at the University of Texas, said, “The biggest base of opposition to the expansion of legal gambling in Texas is a moral one and comes from political conservatives, and they are a powerful constituency in the state right now. You have to look at the chances of legalizing sports betting in Texas being pretty slim at this point.”

Texas has a lottery and allows social gambling and some parimutuel wagering on horse and dog races. Native American casinos exist but are frequently involved in legal battles with the state.