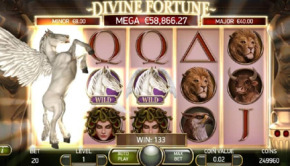 A Sewell, New Jersey woman was at work on a conference call when she decided to gamble online on her smart phone.  She started playing the progressive Mega Jackpot game, Divine Fortune, on playsugarhouse.com, and in the middle of her call the lucky winner, who asked not to reveal her name, hit the Mega Jackpot for $287,945 on a $2 bet.

On SugarHouse Online Casino’s chat room the woman told fellow players she was shocked when she hit: “I was actually on a work conference call and almost screamed at loud!”  It’s also her birthday this week so she’s excited about the best surprise present ever!

This is the biggest jackpot in New Jersey to date for Divine Fortune, a progressive Mega Jackpot game, and the biggest winner for playsugarhouse.com since SugarHouse Online Casino entered the iGaming market in NJ in September 2016.

“We are extremely excited for this winner who started playing with us in January of this year,” said Richard Schwartz, President of Rush Street Interactive, the site’s operator. “As we approach our 2 year anniversary, hitting this record-breaking jackpot is great for us and for the entire online gaming industry, as it proves people can win life-changing amounts online at anytime and anyplace.”

Divine Fortune is a 5-reel, 3-row, 20-line (fixed) video slot game with 3 different jackpots including the progressive Mega Jackpot.  It’s one of the more than 400 games players on playsugarhouse.com can choose from that include slots, blackjack, roulette, video poker, and virtual sports betting.