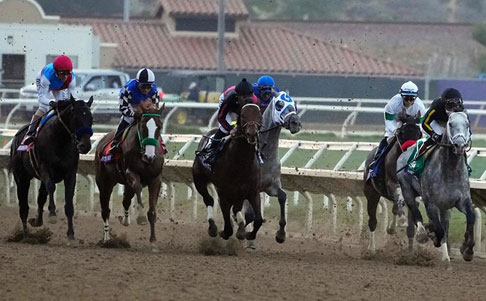 Several horses came out strong in Kentucky Derby Preps and others saw their stock fall. Here are some horses to watch.

The heavy Kentucky Derby prep lifting is done. Yes, the Grade 3 Lexington Stakes is this Saturday at Keeneland, but that minor Derby prep will put two horses at the most into the field.

So with three weeks and change until the May 7 Run for the Roses and all the meaningful Derby preps behind us, it’s time to look at who came out of the recent Championship Series Derby preps smelling like those proverbial roses—and who came out simply smelling.

To be sure, these next three weeks will feature more twists and turns off the Derby trail. Horses will get hurt during workouts, spike fevers at untimely moments, and otherwise find ways to disappoint and frustrate their connections.

A lot can—and will—happen between now and the afternoon of May 7. Here’s a look at five horses coming out of recent top-shelf Derby preps and where they’re headed at this moment. 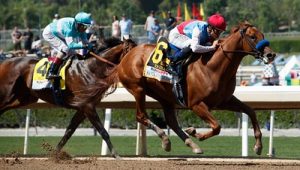 Four years ago, a lightly raced colt with only two starts went into the Santa Anita Derby and came out a Grade 1 winner. Three starts later, Justify was the 13th Triple Crown winner in American Thoroughbred history. Can lightning—and history—repeat itself?

The $1.7 million Gun Runner colt ran down stablemate Messier in the deep stretch for the Santa Anita victory in only his second start. Taiba’s two Beyer Speed Figures: a 103 for his maiden-breaking, 7 ½-length debut, and a 102 for the Santa Anita Derby are among the best for a 3-year-old this year. The speed to win a modern Derby is there for the asking. Is the ability to use that speed to overcome a 20-horse Derby free-for-all there as well?

Taiba is 8-1 on Caesars/William Hill future boards. He wasn’t in any of the Kentucky Derby Future Wager pools, so you got him at 18-1 if you took “All Other 3-Year-Olds.”

Race fans, join Unibet Sportsbook in time for Kentucky Derby season. Once you add funds, your first cash bet is insured up to $500 if you don’t hit a winner.

Since the Derby points system began in 2013, only one closer crossed the finish line first: Orb in 2013. The modern points-system Derby rewards early, sustainable speed and punishes procrastinators. But could this be the year a closer draws the curtain on that trend?

Watch Zandon’s 2 ½-length victory in last Saturday’s Blue Grass Stakes at Keeneland and you could be convinced a closer could finally close the Derby deal. A virtuoso ride from Flavien Prat took Zandon from 10th through the first half-mile to first at the final furlong pole. Need more proof? Zandon hasn’t missed the board in four races (2-1-1). His “worst” race was a third to Epicenter and Smile Happy in February’s Risen Star at the Fair Grounds, when he broke in the air coming out of the gate, yet finished only a half-length behind Smile Happy for second.

Zandon is 7-1 at Caesars/William Hill, and 18-1 on the final Kentucky Derby Future Wager pool. 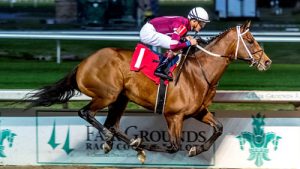 Epicenter is the Derby futures favorite for a reason, and the best opportunity trainer Steve Asmussen has to break his 0-for-23 schneid in the Derby. Epicenter is a head loss to 28.50-1 longshot Call Me Midnight away from sweeping Fair Grounds’ four Derby preps. He won December’s Gun Runner Stakes a month before Call Me Midnight snatched and grabbed the Lecomte from him at the wire.

Epicenter rebounded in versatile fashion, wiring the Risen Star, then coming off the pace to take the Louisiana Derby by 2 ½ lengths. He is a consistent horse, racking up 97 Equibase Speed Figures in his last four races, and his ability to press the pace, then pounce bodes well in the Derby.

Epicenter tops Caesars/William Hill (5-1) future boards. He closed as the 9-2 favorite in the final KDFW. 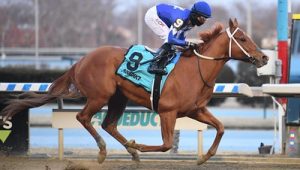 Call him the flip side of Asmussen’s Derby dreams. He came into last weekend’s Wood Memorial as an unbeaten 1.90-1 favorite. He came out of it with that aura of invincibility in pieces, after finishing sixth by 21 ½ lengths. To be fair, he hit the gate at the start, but every time Jose Lezcano asked for more, Morello blinked. If he’s going to give up that easily after a poor start in an eight-horse race, what can you expect Morello to do in a 20-horse Derby?

Talk about running on reputation—or fumes. The run-happy colt Smile Happy spent the entire winter and early spring finishing as the favorite in various Kentucky Derby Future Wager pools and camping on the first page of Derby future boards. Much of the former is due to Jim “Mattress Mack” McIngvale throwing cash on him like a drunken sailor on shore leave. McIngvale owns Runhappy. Much of the latter is due to Smile Happy winning the Kentucky Jockey Club last November.

So what did Smile Happy do to repay all those bettors? Finish second to Epicenter as the 2.20-1 favorite in the Risen Star, then rinse and repeat in the Blue Grass to Zandon as the 1.90-1 favorite. This is a troubling trend. Smile Happy has the speed, connections, and ability to win a Derby. But he hasn’t shown any of this as a 3-year-old.

Ready to play the ponies? Place a first-time wager of up to $1,100 at Caesars Sportsbook, and you’ll get it back in the form of a Free Bet if you lose.