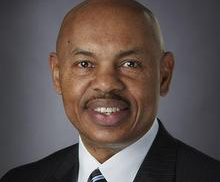 The Forest County Potawatomi Community of Milwaukee, Wisconsin has cried foul in the rejection of its plan to build a casino in the city of Waukegan, Illinois. According to the tribe, it ranked highest in a consultant’s report, yet was graded last and pushed out of the running. Potawatomi CEO and General Manager Rodney Ferguson (l.) said a casino in Waukegan made sense.

The Forest County Potawatomi Community of Milwaukee, Wisconsin has filed suit against the city of Waukegan, Illinois, for rejecting its plan to build a casino there.

Among four bidders for the local gaming license—part of Governor J.B. Pritzker’s statewide gaming expansion plan—the tribe says it scored No. 1 or No. 2 in almost every category in a study compiled by a Chicago consultant. Yet it was graded dead-last and shut out of the race.

Three other proposals were certified by city officials and sent to the Illinois Gaming Control Board for its review. The final candidates are Las Vegas-based Full House Resorts; North Point Casino, backed by former Illinois state Sen. Michael Bond and Las Vegas-based Warner Gaming; and Rivers Casino, a Rush Street Gaming brand, headquartered in Chicago. All the proposals focus on a 32-acre tract at the site of the old Fountain Square shopping center.

Potawatomi CEO and General Manager Rodney Ferguson said Waukegan would be a good fit for the tribe, which operates the Potawatomi Hotel & Casino in Milwaukee, about an hour’s drive from Waukegan (the word “Waukegan means” “little fort” or “trading post” in the Potawatomi’s native language). “Because we’ve been in the market the last three decades, it just makes sense to continue our brand in that particular market area,” Ferguson said.

But with its rejection at the city level, the frustrated tribe is taking Waukegan to court.

George Ermert, spokesman for the Potawatomi, called the city’s decision “a head-scratcher.”

“Potawatomi ranked either first or second in nearly every category, yet the consultant put them last in the report. Why?” he asked. “In comments before the city council, Johnson Consulting said that there was no weighting to the scoring, and they used ‘simple math.’ However, if you used simple math, the final results would be very different.”

Indeed, the Potawatomi proposal ranked first in a number of categories including number of jobs created and revenue projections; and second in estimated project cost ($343.3 million), year-five revenue projections, and projected per-unit revenues for slots and table games.

The only category in which it bottomed out was the first one listed in the study: the proposed site purchase price. The Potawatomi figure to acquire the Fountain Square site was $5.6 million, compared to $11 million for Rivers; $22 million for North Point; and $230 million for Full House.

The problem with that, Ermert told GGB News, is that the Potawatomi never offered $5.6 million at all, but simply stated it would pay within 15 percent of the plot’s market value, which had earlier and separately been assessed by the city at $5.6 million. The tribe later submitted supplementary materials saying it would offer $12 million for the plot. That figure was not included in the Johnson Consultants report.

“This underscores what the Potawatomi believe are the considerable flaws with the process used by the city to certify potential casino operators,” Ermert said. “We think the Potawatomi have a strong and valid claim against the city of Waukegan.”

He also said the tribe is suing based on a violation of the Open Meetings Act, which he said occurred when the city would not permit sufficient public comment.

Contacted by GGB News, consultant Charles Johnson declined to comment except to say, “Land price was the key factor.”

But Bob Long, attorney for the city, was not nearly as circumspect. He called the tribe’s lawsuit “bogus” and a case of “sour grapes,” and said the Potawatomi proposal was eliminated because it didn’t work for Waukegan.

“First, there was no violation of the Open Meetings Act—some 1,300 written comments were received, and around 7,500 people spoke at public meetings,” Long said. “Everybody had a right to express themselves fully, and the tribe would not have benefited from another three-minute speech.”

He added that a ranking from the consultant “has no force of law,” and the final decision rests with council members. He called the tribe’s decision to file for a temporary restraining order “bullying tactics.”

“I don’t think this is a real lawsuit, and I don’t think they can win it,” Long said. “Fundamentally, they came in with a proposal that really doesn’t match what the city is looking for.” As for the proposed purchase price, he said, “They didn’t use any figure, and the consultant couldn’t put down zero, so he used the assessment price” reached by the city in May. “After the bidding was complete, they tried to supplement it, saying, ‘Oh no, you didn’t understand us, we were really saying $12 million. That’s BS.”

Long said he doesn’t believe the Potawatomi will seriously pursue the lawsuit, but Ermert insisted the tribe did not get a “fair shake” and will have its day in court.

Meanwhile, Full House’s “American Place” proposal was ranked tops by the consultant. According to the operator, the property would include a “world-class” casino with a state-of-the-art sportsbook, boutique hotel, a 1,500-seat live entertainment venue, restaurants and bars and other amenities.

Alex Stolyar, senior vice president and chief development officer for Full House told GGB he doesn’t believe the market has reached saturation, or that a Waukegan casino would find it hard to compete with a planned megaresort in Chicago. “If you look at the metrics on the number of gaming positions per person compared to St. Louis or Kansas City or Cincinnati, it’s very underserved.”

American Place would not be a locals-only casino but a “destination resort,” he said, with 20 luxury villas, butler service and a helipad to chauffeur VIPs to the property.

“This will be the highest quality product for the gamblers in that market,” he said. “We expect to pull from Milwaukee, Minneapolis and throughout the Midwest. It’s not too far from O’Hare, and there are a ton of international flights. For the right customers we have a private chopper to bring them in. Our management team has experience with best-in-class properties within a developing market.”

Stolyar rejected the suggestion that Full House has an advantage based on the consultant’s assessment. “For the record, I don’t believe in any way we are the frontrunner. But I believe we have the best proposal that’s going to create most jobs and revenue. We’re up against two very formidable opponents with a great deal of political capital in Illinois and Waukegan. But our proposal compared to the others was unique. It went beyond targeting locals, being a local gaming joint, and creating a real destination.”