HomeThe ShuffleWith Diaz Out, UFC 262 Is All About the Lightweights

With Diaz Out, UFC 262 Is All About the Lightweights 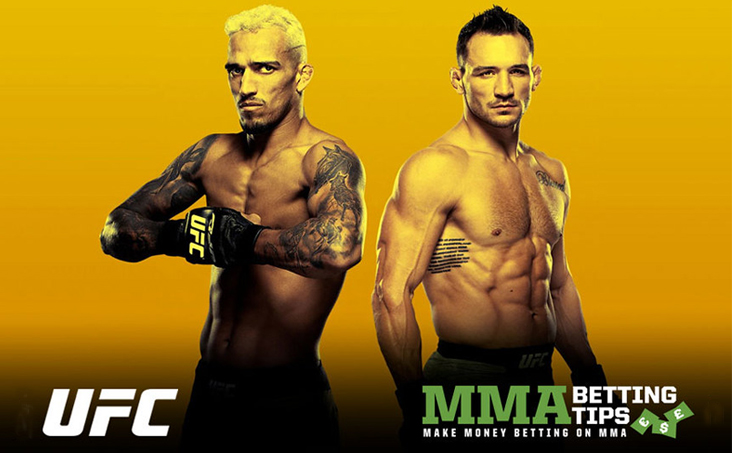 With Nate Diaz out of the middleweight ring in UFC 262, the focus shifts to the main event, and lightweights Chandler and Oliveira

MMA fans are bummed that Nate Diaz postponed his middleweight fight against Leon Edwards in Saturday’s UFC 262 in Houston. That bout and the matchup of Charles Oliveira vs. Michael Chandler were billed as the co-main events. And with Diaz MIA, it took a little of the luster off Fight Night.

Now the focus is on the opening bout, with featherweights Shane Burgos and Edson Barboza, plus Chandler and Oliveira in the Lightweight Championship.

Diaz suffered an undisclosed injury and was forced to pull out; Diaz vs. Edwards has been rescheduled for UFC 263, June 12 at Gila River Arena, home of the Arizona Cardinals.

Chandler’s not a fan of Diaz, but is also disappointed that he won’t be there. “That’s the Catch-22 of Nate Diaz,” he told MMA Junkie. “He could have overshadowed the new guy, I’m the new guy, just got here. … But there’s no doubt he brings eyeballs, he brings hype.”

The loss of Diaz doesn’t make UFC 262 a bust. Gamblers still can wager on some quality match-ups. Let’s take a look at the five contests on the main card.

Burgos Looks to Bounce Back with Barboza 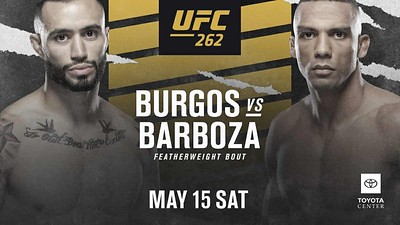 The opening bout of the main card features featherweights Burgos and Barboza, with Burgos the -125 favorite.

But don’t overlook Barboza at +105. Though he’s lost five of his last seven fights, he lost against quality opponents.

Burgos also is coming off a loss, a unanimous decision to Josh Emmett, only the second in his professional career. His aggressive style makes him the favorite in this bout. But Barboza has a punishing style too. His kicks have been tabbed as the best in UFC history. In UFC 262, they should help keep Burgos at bay, and prevent him from delivering a knockout punch.

Create a new player account at WilliamHill.com. If your first bet loses, you’ll earn a Free Bet of equal value up to $500! 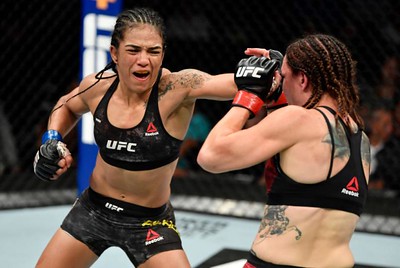 Katlyn Chookagian wants to get back into title contention, while Viviane Araujo seeks to enter the same ring. This fight’s winner will have the opportunity.

Chookagian is a -145 favorite. She’s 2-2 in her last four fights, including a win over Cynthia Calvillo in November. Araujo, who’s +120, is on a two-fight winning streak, and would have a perfect UFC record if not for a decision loss to Jessica Eye.

Chookagian has the experience, plus a height and weight advantage. Araujo has more punching power, and that could make the difference.

Jack Hermansson went 1-2 over his last three fights, but he’s a big -170 favorite over Edmen Shahbazyan, at +140. Hermansson has the experience, with a 21-6 record, but his recent performance is a concern.

Shabazyan was rocketing up the charts in UFC. He won three fights in 2019, with all of them ending in the first round. But when he faced Derek Brunson in 2020, he was out of shape and knocked out by Brunson.

That fight made Shahbazyan an underdog against Hermansson. If he shows up in better shape, he should provide a much better fight than the odds would indicate in this middleweight bout.

Double down at GoldenNuggetCasino.com. Your first settled sports bet will be matched with a Free Bet up to $250. Minimum odds -200.

It’s unfamiliar territory for Tony Ferguson, as he enters this lightweight bout with Beneil Dariush on a two-fight losing streak. This fight does him no favors, as Dariush has won his last six bouts.

Dariush is a -145 favorite, while Ferguson is +120. Ferguson needs this victory if he has any chance of getting back into the UFC elite. If he can punish Dariush, like he has so many previous opponents, he’ll be back in that conversation.

But that might be a tall order. Dariush has better wrestling skills and decent punching power. If Ferguson falls into that trap, Dariush will prevail.

Get a 10% Daily Parlay Boost at BetRivers.com! What better reason to log in every day? Promo runs through May 23.

Title Up for Grabs in Chandler-Oliveira Main Event

This is the marquee fight of UFC 262 and should live up to the hype. Charles Oliveira is the -130 favorite, while Michael Chandler is at +110 for the lightweight title.

Chandler made quite an impression in just one UFC fight, knocking out Dan Hooker in the first round. He was a successful college wrestler at the University of Missouri, and brings that skill set to UFC.

Another factor to consider: the age difference. Chandler is 35, four years older than Oliveira. Oliveira’s been in the UFC longer, however, fighting since he was 20. His combination of powerful striking and kicking has served him well. Will it be enough against Chandler? If Oliveira is too aggressive, he might have problems with Chandler, who has the power to win by submission.

Betting the UFC? iGamingPlayer’s got you covered, blow for blow, in every bout. Subscribe below.