With No Opening Date, AC Casinos Play A Waiting Game 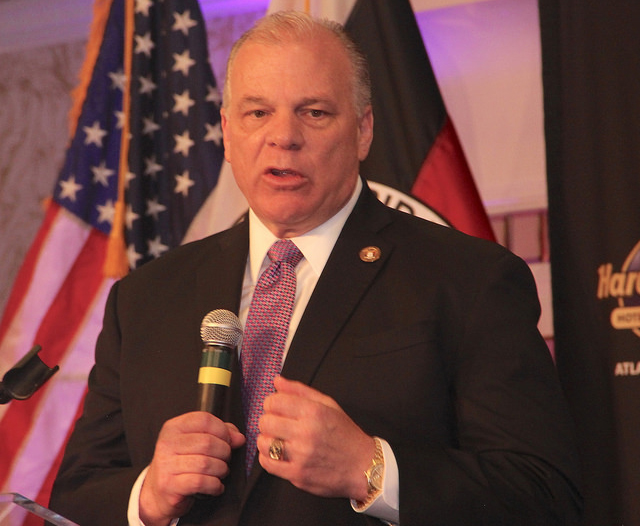 Health standards have been legislated and benchmarks set, but no date has been set for casinos in Atlantic City to reopen. However, two bills that codify those standards may help to ensure safe business operations, according to Senate President Steve Sweeney (l.).

Memorial Day weekend was expected to draw big crowds up and down the Jersey Shore. As early as Friday, throngs strolled the boardwalks in Ocean City, Atlantic City and elsewhere, as if there were no such thing as the coronavirus.

“The last thing any of us wanted was for summertime down the shore to be just a memory,” Governor Phil Murphy said on May 14, when he gave the order to reopen portions of the state, including beaches.

But AC’s nine casinos still have locks on their doors. Though casinos can be perceived as having an advantage, with large physical footprints that help promote social distancing, “the indoor spaces are not well-ventilated,” according to Murphy.

“Casinos are a tough nut,” the governor said at a coronavirus briefing in Trenton last week. “It’s indoors. There’s no ventilation. It’s close proximity, and (patrons are) largely sedentary.”

Most Atlantic City casinos have opted to take room reservations but will keep their hotels closed for now. Richard Broome, a spokesman for Caesars, said the bookings are “part of our plan to ensure we have business when we are allowed to reopen.”

That could happen soon. A state Senate panel led by Senate President Steve Sweeney has advanced a pair of bills that would require the New Jersey Department of Health to set standards for casinos and hotels statewide; the full Senate and the Assembly have already approved the latter bill.

The Casino Association of New Jersey has collaborated with the AtlantiCare health care system to develop those standards, said Bob Ambrose, a casino industry veteran, consultant and adjunct casino and hospitality professor.

“I’ve spoken to casino executives in several gaming jurisdictions in recent weeks,” Ambrose told GGB News. “They’ve worked closely with both health care professionals and state regulators to redesign the guest experience in a formula for both safety and operational balance.”

When casinos do open, employees and guests will have to practice social distancing, wear face masks and use hand sanitizer, among other steps to combat the virus.

“In the casinos, there will be smaller gaming areas. Some slot games may be closed, and the stools removed in order to have distance between the gaming products, at least in the short term,” Ambrose said. Plexiglas dividers will likely separate slot players, and in table games, separate dealer and player.

The standards in the casino bill will require cleaning with disinfectant products qualified for use against SARS-CoV-2 or a reasonable alternative. Staff will clean doors and door handles at all entrances, as well as computer keyboards, touch screens, credit card readers, printers, telephones, light switches, and other surfaces such as countertops, furniture, and desks.

Essentially, every surface in every room and every location will be regularly cleaned and sanitized, to wit:

Then there are the statewide benchmarks bandied about, “most notably, within our healthcare sector, where the numbers are concrete and we can see the impacts our policies are having,” according to Murphy.

With a date now set for Nevada casinos to come back—June 4—Sweeney worries that New Jersey will open later than it should, especially with the industry taking safety and health precautions seriously.

“These standards will help to balance the need to return to work and restart the economy with the safety of workers, guests and patrons by codifying CDC guidelines to prevent the spread of Covid-19,” he said. “Hotels and casinos are anchor attractions for two of the most significant sectors of New Jersey’s economy, tourism and gaming. They should be kept safe and clean for workers and guests.”

If Murphy or the state Division of Gaming Enforcement wants further changes, they can require them, he said.

“But any action needs to happen sooner rather than later to offset long-lasting economic harm to South Jersey,” Sweeney told the Press of Atlantic City. “(The casinos) need to get back up and going again. They need to put people back to work.”

Will casinos be ready by July 4? Ambrose isn’t sure. “Having worked in the industry myself, I know there’s a unique set of operational and regulatory challenges in the new post-virus environment; whether it’s the casino floor, dining, lodging or retail,” he said.

“In some states, including New Jersey, there’s been hedging on locking in dates too far in advance. However, businesses need to operate. And planning in a vacuum is difficult.”

Sweeney would undoubtedly agree. He told the Press that Murphy “did a good job” managing the crisis, “but you have to be ready to reopen in a safe fashion and bring businesses and people back to work. Because without that, the back end of this is going to be worse.”

And Atlantic City’s nine casinos require more to reopen than adhering to health standards, said Richard McGrath, a spokesman for Sweeney. “They need an executive order.”