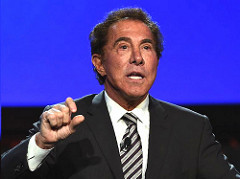 Ten women, all current Wynn Resorts employees who claim casino titan Steve Wynn (l.) preyed on them for sex, have filed separate lawsuits against the company, its disgraced ex-chairman and CEO, and others. They claim the company has not acted to remedy the years of suffering they’ve endured.

Nine women who work at the salons at Wynn Las Vegas and Encore Salon, all self-identified victims of accused sexual predator Steve Wynn, are suing Wynn Resorts and Wynn himself, claiming he and his company used fear and intimidation to try to silence them before and after an explosive Wall Street Journal report detailing the tycoon’s alleged misconduct broke early last year.

It’s the second lawsuit filed against the Las Vegas-based gaming giant in less than a week, following close on a class-action lawsuit brought by Brenna Schrader, a long-time massage therapist still employed at Wynn Las Vegas, who claims she was forced to perform sex acts on Wynn from 2012 to 2016, and says a hostile work environment continues for women who accused the casino mogul of sexual harassment.

Schrader’s suit says she tried to report “the sexually hostile environment and the sexual prisonlike atmosphere” in the company to managers from the time she was forced to have sex with Wynn and as recently as this year, but she was met with resistance.

“Defendants appear to blame victims for the discriminatory environment that permeates the workplace atmosphere to this day,” her complaint states.

According to several gaming news sites reporting on the suit, her attorney Burke Huber is quoted as saying executives at the company “mentally abuse” the therapist “and call plaintiff and other female victims prostitutes and sluts.”

The women bringing the second lawsuit, filed in Clark County District Court in Las Vegas, allege that on January 17, 2018—a little over a week before the Journal story hit—Wooden sought to frighten them into silence.

Wooden, along with Troy Mitchum, the former vice president of human resources, allegedly made it clear that “Wynn Resorts did not want them to tell the media the truth about Steve Wynn’s misconduct and the years of cover up,” the complaint states, even though the plaintiffs “knew they had been abused and mistreated by Steve Wynn in years past” and “lived in fear of being chosen (again) by Steve Wynn to be his sexual prey.”

A few days after this meeting, according to the complaint, the company convened a mandatory gathering of salon employees at Wynn Country Club, where the women manicurists and makeup artists who all say they experienced “acts of sexual harassment and personal degradation” by the billionaire at different points in time were put on the spot by their alleged attacker himself.

“While his security and top executives lined the walls, Steve Wynn asked the 40+ salon employees assembled to raise their hands if they ever felt assaulted or abused by him, pressuring the Salon employees to ‘out’ themselves and subject themselves to further humiliation and possible retaliation,” the suit states.

Nine days later, on January 26, the Journal story broke. On February 1, Wynn appeared at the salon with a camera crew for an 80-year-old employee’s birthday celebration, where some plaintiffs were told they needed to go on camera and say the billionaire had not assaulted or abused them, the lawsuit states. It’s also alleged that during the birthday party, Wynn “joked about sexually harassing that female employee, kissed her on the lips, initiated kisses and group hugs with other Salon employees, and made intimidating comments about the press.”

The women also say some salon employees were required to do “surprise and forced interviews” with investigators hired by the board of directors.

“Wynn Resorts was not interested or serious about protecting its employees, and certainly not from Steve Wynn or his remaining allies in the executive ranks,” the complaint contends.

Perhaps the most damning part of the Journal’s reporting was that Wynn secretly paid $7.5 million to one of his reputed victims, a former Wynn Las Vegas manicurist. It’s been alleged that the money was to quash a paternity suit, although this has not been proved. The payment was known to the board of directors and would later raise concerns on Wall Street when it was revealed in the course of a bitter court fight between the tycoon and his ex-wife, Elaine Wynn, over her rights as a major shareholder. Wynn would go on to acknowledge the payment, though he denied the woman’s claim that he sexually assaulted her.

He strenuously denied all the misconduct charges, but the impact of the initial Journal story in the #MeToo era proved irresistible, even for Steve Wynn, often referred to before his fall as the most powerful man in Nevada, a status that appeared to be cemented with the rise of Donald Trump on the national political stage. Trump’s ascent to the White House signaled Wynn’s own rise as a star of the Republican Party. A lavish GOP donor and reputed confidante of the president, who also has weathered repeated headline-making charges of sexual harassment, he was named finance chairman of the Republican National Committee after the 2016 election and was one of the organizers of the Trump inaugural.

Then it all collapsed. He resigned from the RNC the day after the Journal story was published. On February 6, the 76-year-old resigned as chairman and CEO of the company he founded and named after himself. Only then did the board of directors appoint a special committee to investigate the accusations against him. A month later, with Wynn Resorts under investigation by Nevada and Massachusetts regulators and in full damage-control mode, with an unfinished $1.4 billion Boston casino hanging in the balance, he severed his ties with the company by selling off his substantial shareholding. Wooden, Mitchum, General Counsel Kim Sinatra and several other top executives subsequently quit, and the board was purged of the close associates and friends who’d enabled him to exercise virtual dictatorial control over the company.

Management has since instituted policies and procedures to prevent sexual harassment in the workplace, reportedly providing training and a safe haven for employees to report it and strengthening the company’s ability to respond effectively if it occurs. This did not, however, prevent Nevada and Massachusetts from leveling $55 million in fines, including a $500,000 fine against current CEO Matt Maddox.

How well all this is working, however, is a matter the latest lawsuits dispute. The women say the company has not remedied “the harm these years of abuse, misconduct and corporate cover-up have inflicted on many Wynn Resorts employees, ruining many lives, livelihoods and reputations,” and they demand injunctive relief.

Wynn Resorts responded to the nine plaintiffs with a statement, saying “The claims appear to be those already thoroughly investigated by the special committee (set up by the company) and regulators; no new claims of this type have been received by the company since the close of the investigations.”

The women, however, want Wynn Resorts to “immediately correct all discriminatory and retaliatory practices” and are seeking damages for “discrimination based on sex and sexual harassment; retaliation; intentional infliction of emotional distress; invasion of privacy; and negligent hiring, training, supervision and retention of high-level executives and human resources personnel.”

“Plaintiffs are being forced to file this public suit as a last resort, because their employer, Wynn Resorts, has failed to fulfill its obligations under Title VII (of the Civil Rights Act) to remedy discrimination which has occurred, make victims whole and prevent future occurrences,” their suit states.

This echoes Schrader’s complaint, which alleges the company “continues to outwardly support defendant Wynn through memorandums and its employees, which is calculated to deter female employees from cooperating or liberating themselves from forced sexual servitude and a sexually hostile environment.”

The company issued a separate statement denying her claims.

“Wynn Resorts is deeply committed to a fair, supportive and open work environment. The company takes prompt action and addresses each and every harassment complaint it receives. Since the completion of the investigation by the special committee and regulators, the company has received no complaints of the nature described in the lawsuit other than the allegation in this lawsuit which was promptly investigated. The company immediately followed all appropriate procedures to address the matter.”