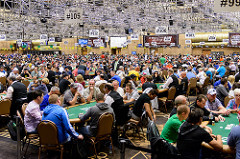 The World Series of Poker set an attendance record for the sixth straight year as 123,865 players turned out for the 50-day tournament event.

The prize pool of the 78-tournament series at the Rio All-Suite Hotel and Casino was the largest in its 49-year history, amounting to more than $266 million in prize money—an increase of more than $35 million compared to last year, according to the Associated Press.

A record 18,105 participants got a cut of the prize pool with 28 earning at least $1 million. The series’ Main Event saw 7,874 entries, making it the second largest in the series’ history. Indianapolis resident John Cynn won the main event taking home $8.8 million.