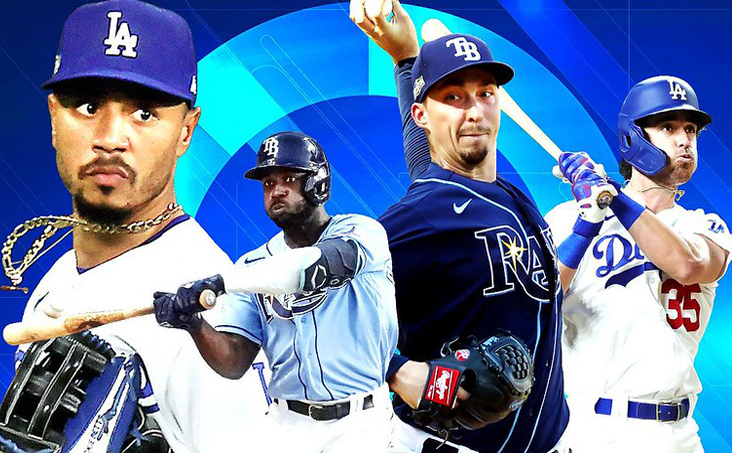 Baseball’s Fall Classic is finally upon us, and the gladiators are preparing to enter the ring. Let’s see what’s in store for the Tampa Bay Rays and Los Angeles Dodgers.

The dust has settled in this wacky 60-game Covid season, and only two teams remain. The L.A. Dodgers and Tampa Bay Rays are each league’s top side and actually posted the two best records in Major League Baseball this season.

The Dodgers and Rays have taken very different paths to the 2020 World Series. The top teams in the regular season each had a unique experience in the playoffs and particularly in the LCS round.

Tampa coasted to a seemingly insurmountable 3-0 lead over the Houston Astros before letting them climb all the way back to tie it at 3-3. After the possibility of an ALCS sweep, they needed a deciding Game 7 to advance to the World Series. Los Angeles, on the other hand, found itself down 3-1 to the Atlanta Braves and on the brink of elimination before rattling off a trifecta of victories to get through to the series.

It’s easy to assume that, since the Rays just lost three of four and the Dodgers bagged three in a row, the Dodgers’ superior form will prevail here. That’s a naïve view. Tampa’s been a dominant ballclub since Day 1 of this season, so don’t make the mistake of writing them off now. They almost swept their series, when L.A. could have been eliminated in five. That should serve as a positive for Tampa’s case.

Let’s take a look at positional matchups in this series and which side holds the advantage in each:

This matchup might be the most lopsided of the series. Tampa’s lineup is dangerous, but the Dodgers’ is stacked from top to bottom, tops in the MLB and a force to be reckoned with. Leadoff hitter Mookie Betts has shone bright in the field, while staying consistent at the plate. Corey Seager just enjoyed one of the most productive LCS series of all time at the plate. And superstar Cody Bellinger just hit a home run to give his team the lead late in Game 7 from the six hole. There’s no weakness in this group, and they’ll be a lot of fun to watch against Tampa’s elite pitching.

While L.A. has a couple of solid bench guys, Tampa has a couple more. Multiple bench players have played huge roles throughout this playoff run, including infielder Michael Brosseau, whose solo home run propelled the Rays through to the ALCS in a winner-take-all game against the New York Yankees. Manager Kevin Cash can afford to get creative in this series and play matchups to counteract the complexity of LA’s bullpen.

Starting pitching has been the main strength of this Rays team for the past few seasons, and is the biggest reason they find themselves four wins away from a championship. Blake Snell and Tyler Glasnow represent one of the best 1-2 duos the league’s seen in recent years. Charlie Morton is one of the best big-game pitchers in the league, and was the winning pitcher for Houston in Game 7 of the 2017 World Series. If the Rays win the 2020 World Series, this three-headed snake will be largely responsible. There’s no other way for this team.

The Dodgers have been very creative with their bullpen so far in these playoffs, using starters as relievers for a few innings all over the place. Blake Treinen, Pedro Baez and Kenley Jansen have also been excellent for this team as true relief pitchers so far this fall. There are many options at Coach Dave Roberts’ disposal for this series, and it’ll be exciting to see how they’re deployed.

Place an In-Play Bet on each game of the World Series at PointsBet.com, and you’ll get a 100% matched Free Bet up to $25 to use in-play on the remainder of the series!

This was probably the toughest matchup to give an edge to, as both managers have been outstanding and deserve all praise for their teams’ pennant wins.

Tampa’s Cash has been incredible this season. With a lineup that doesn’t exactly stand up to L.A.’s, he’s had to be very creative to maintain success throughout the year. That said, I’ll give the nod to World Series experience. Not only will this be Roberts’ third World Series appearance in his five seasons as Dodgers’ manager, but he’s also won a Manager of the Year award and made it to the NLCS and NLDS in those two other seasons. Roberts has known nothing but great success as a manager and has the advantage of World Series experience—and recent experience, at that.

Overall, the Dodgers seem to have a tight advantage here. They also seem to be the overwhelmingly popular pick to win the Series, and I don’t disagree. The Rays deserve loads of respect for what they’ve accomplished this season, and definitely have a solid chance to win four of these next seven games.

And just as a heads up, if you think Tampa’s the team to beat, ALCS MVP and emerging star Randy Arozarena is currently +1200 to win World Series MVP (according to William Hill). Don’t be afraid to take a shot!

Get in on the 10/23 Big Blast Boost at WilliamHill.com. Place one $20+ pregame ML and earn a $10 Free Bet credit for every HR hit by the following: Rays: Randy Arozarena, Mike Zunino or Manuel Margot. Dodgers Max Muncy, Mookie Betts, and Cody Bellinger. Cannot bet both sides!