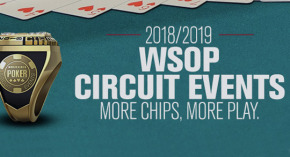 While winter is a slow time for Atlantic City—and for that matter Las Vegas—the season is actually one of the hottest for online gaming. With cold weather keeping people inside, the winter months can see some great online casino promotions and even better—great poker tournaments.

WSOP.com, which serves both New Jersey and Nevada players, is proving that by mapping out some great tournament play for February, starting with its Winter Online Poker Championships. The championships include 47 different online tournament events. They got underway February 10 and run through February 24.

The tournaments carry a combined $1.5 million in prize pool guarantees topped off by a $200,000 guaranteed main event on February 24. The main event carries a $525 buy-in and also awards a championship belt.

Though some of the early events are already in the books, the championships will run daily, averaging about three separate events a day through February 24. So there’s plenty of action left!

Buy-ins for daily tournaments can be as low as $20 and range up to $1,000 for a special high roller tournament on February 19.

WSOP’s online championship events have been a success for online poker in the U.S. and have steadily been gaining players. That’s because WSOP.com has spiced up the tournaments with some great features, such as knockout tourneys and turbos, as well as offering a few Pot Limit Omaha events.

Check out the full schedule here to find the tournament that best suits your play and bankroll.

Along with the championships, WSOP.com is readying play for its second online circuit event. Based on the WSOP’s live circuit which runs live tournaments at Caesars properties throughout the country, the online circuit will run from February 26 to March 10. It includes 13 events culminating with a $250,000 guaranteed Main Event on March 10.

Sign up at WSOP.com and join the online circuit events.

The events in the circuit do have higher buy-ins than the championships, however. The lowest buy-in is $200 including the circuit’s opening event, a $20,000 NLH Knockout event on February 26. The buy-in for the championship event is $525. Still, these buy-ins support a combined $1 million in prize pool guarantees in just 13 events.

The cool part—and a nod to the live circuit—is that the winner of each event wins a special championship ring, similar to the bracelets WSOP awards live tournament winners.

You can get the full schedule at our promotions page for WSOP.com.

Whether you like your tournaments big or small, WSOP.com will have something special cooking all through February.