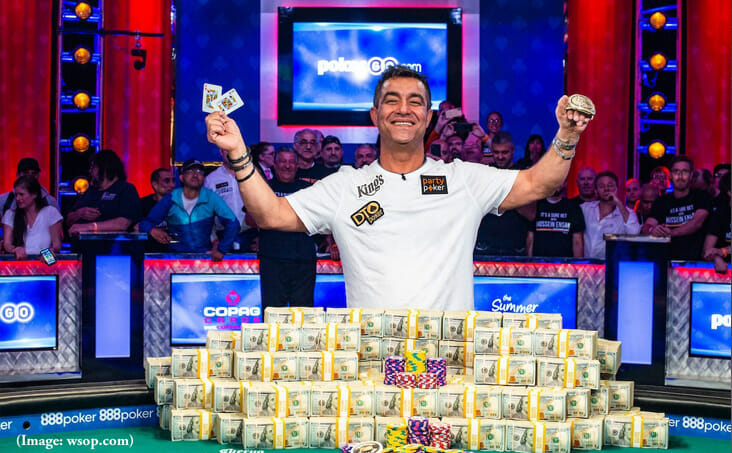 As the 50th World Series of Poker winds down, it’s a good time to look at how online events have changed the games.

Well, it’s all over. On Wednesday, Hossein Ensan took top honors at the World Series of Poker Main Event in Las Vegas, routing Dario Sammartino in a dramatic final hand and pocketing $10 million in the process.

Now’s a good time to look at how well online contests have fared in the world’s most famous poker event.

When the Main Event got under way, online players had completed the nine scheduled events open to people in Nevada and New Jersey. With more online players than ever, how’s the WSOP doing?

The answer is an unequivocal “not bad.”

An estimated 12,200 players played online this year. That’s on par with last year, when there were more than 6,000 players for four online events.

The big question: how many of these players have benefited from the player-sharing between Nevada and New Jersey and played online from the East Coast? It’s hard to say, since the WSOP doesn’t break down who’s playing from where. Someone with a New Jersey address may actually be in Vegas for live WSOP events and still play in an online event.

At the same time, many online players who finished in the money had New York and Pennsylvania addresses. Just saying—it would be easier for these players to hop the border into New Jersey than to fly to Vegas.

One estimate had Jersey players making up about 15 percent of the online fields but again, that’s not official. The online tournaments have been averaging about 1,500 players.

What we do know is that two online events were won by players from New Jersey: Yong Keun Kwon, who won more than $165,000 in the first online event in June, and Daniel Lupo, who won $145,000-plus in a $500 buy-in Turbo Deepstack in the fourth online event (technically Event 46 on the main WSOP schedule). Lupo disclosed in interviews that he played from his home in New Jersey. And five of the top finishers in that tournament were also Jerseyans.

A quick aside: Lupo also reportedly won five tournaments in the PokerStars New Jersey Spring Championship of Online Poker, so right now he’s one of the state’s most successful online players.

While not a huge showing for the online events, most had healthy fields, big payouts and clearly benefitted from player-sharing. It proves that you really can strike it rich sitting at home in your PJs.

What more could an online WSOP player want?

The Right to Choose: