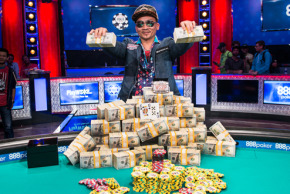 Online bracelet tournaments have been a big winner for the World Series of Poker, and in 2018 players will have a shot at four different online tournaments, up from three last year.

Online tournaments are always available at WSOP.com in Nevada and New Jersey, but a WSOP bracelet tournament is a whole other animal. They’re basically WSOP events awarding the same championship bracelet as all other live tournaments in the series. WSOP is handing out 78 bracelets for tournament winners, and as we said, four will come from online tournaments.

As it stands right now, the tournaments will only be offered at WSOP.com Nevada, but that could change by June when WSOP tournaments get underway. Nevada has signed a poker player sharing deal with both Delaware and New Jersey. Player sharing is underway with Delaware while details are still being worked out with New Jersey.

WSOP officials are playing it close to the vest, but said they could be making an announcement on player sharing in the next few months.

“We fully anticipate New Jersey players being able to compete for WSOP bracelets,” Bill Rini, WSOP’s head of online poker, recently told Online Poker Report. “It’s always been our desire to allow players to compete for WSOP bracelets on WSOP.com in any jurisdiction where it’s legal to do so. That’s why the interstate liquidity-sharing agreement is such a game changer.”

Those kinds of numbers suggest players physically at the WSOP in Las Vegas are also playing online. If this year’s tournaments are open to New Jersey and Delaware players… well, like we said, we have to wait and see, but the fields could be huge.

The four tournaments for this year are one-day events featuring unlimited re-entry.

Further, you can expect online satellites for WSOP events to begin this month at both WSOP.com Nevada and New Jersey.

After all, it’s never too early to start dreaming about WSOP bracelets.

Stay on top of all the latest happenings at WSOP.com at iGamingPlayer.com’s Promotions page.