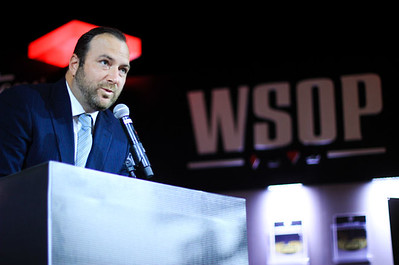 Following weeks of speculation, the World Series of Poker canceled its annual tournament due to the coronavirus pandemic. WSOP Director Ty Stewart (l.) said it’s important to “prioritize guest and staff well-being.” Organizers hope to reschedule in the fall, but online tourneys go on.

After weeks of will-they-or-won’t-they, organizers finally postponed the annual World Series of Poker in Las Vegas.

The 51st annual tournament—the country’s single largest live poker event—was scheduled to run from May 26 to July 15. The tourney will take place sometime in the fall instead, another victim of the coronavirus pandemic.

Besides its size, the tournament ranks as one of the most lucrative annual poker events. Last year’s World Series of Poker drew a record 187,298 entries from 118 countries and awarded a record $293.2 million in prize money.

Despite pleas from Las Vegas Mayor Carolyn Goodman, the resort remains uncertain when Nevada’s casinos, including the tournament’s home since 2004, the Rio, will reopen.

Stewart said World Series of Poker events will be played online through the WSOP.com site during the summer. Details of an expanded series of tournaments, he said, will be announced. WSOP.com is only available in four states: Nevada, New Jersey, Pennsylvania, and Delaware.

The WSOP tournament as it was scheduled planned to feature more than 70 events, but the rescheduled version will be shortened. Still the world championship, the $10,000 buy-in Main Event championship, will remain, according to CDC Gaming Reports.

Before the postponement, officials wondered whether the 2020 tournament would be the last at the Rio. The event uses 500 poker tables and covers 200,000 square feet of ballroom space inside the Rio’s convention center, taking over the entire facility for seven weeks.

In December, Caesars Entertainment sold the Rio for $516.3 million in a sale/leaseback to New York-based Dreamscape Companies. Caesars will continue to operate the Rio for at least the next two years. But Eldorado Resorts purchased Caesars, which owns the World Series of Poker, in a $17.3 billion deal. Last June, when the transaction was announced, Eldorado CEO Tom Reeg twice referred to the World Series of Poker as “an iconic brand.”

Seth Palansky, vice president of communications for Caesars Interactive, believes the Rio will continue to be the home of the tournament. The sheer size of the event will pose a challenge in finding new home.

Tribes Line Up to Su