Wynn Dealers Lose Another Round in Tip Battle 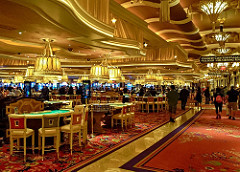 Dealers at Wynn Las Vegas have a federal appeals court ruling in their favor but have yet to collect any of the back tips they’re seeking after losing a second decision before the same U.S. District Court judge who thwarted them five years ago. They vow to continue the fight.

Wynn Las Vegas dealers will appeal their second federal court defeat in a bid to recoup millions of dollars in tips they say the casino had been taking from them illegally for years.

The ruling, handed down on December 18 in Las Vegas by U.S. District Judge Robert Jones, turned on conflicting arguments over the impact of a 2011 U.S. Labor Department regulation stipulating that only employees regularly receiving tips could share in a tip pool. Jones said Congress nullified the regulation with an act passed earlier this year that essentially says the same thing. Therefore, the dealers have no case.

The dealers argue that Jones has erred in retroactively applying a 2018 law to settle a lawsuit that was filed when the regulation was still in force. They actually got Jones overruled on a similar argument two years ago in the 9th U.S. Circuit Court of Appeals. So far, though, they’ve yet to see a dime.

The dispute dates back to 2006, when then-Wynn Resorts Chairman and CEO Steve Wynn imposed new rules that redefined the positions of casino floor managers and forced dealers to share their pooled tips with them, a move that effectively cut dealer pay by around 12 percent. For the Las Vegas Strip the change was unprecedented, and the dealers promptly sued to nullify it, initially in state court in Nevada, where they lost.

The battle shifted to federal court in 2011 after the Labor Department issued its regulation. The dealers filed a federal lawsuit claiming back tips dating to that time. But in 2013, Jones found for Wynn Las Vegas. He said the department had no authority to issue the regulation. When the dealers won in the Circuit Court in 2016, Wynn appealed to the Supreme Court.

Then, earlier this year, with the high court’s decision pending, a new wrinkle emerged when Congress weighed into the fray with a law prohibiting managers from sharing in employee tip pools. Though the law appeared to side with the dealers it negated the Labor Department regulation.

Undaunted by the Circuit Court’s ruling, Jones, who has had more decisions overturned on appeal than any federal judge in Nevada, took all of about five minutes last Monday to decide against the dealers again.

“(Jones’) mind was made up as soon as Wynn filed their motion,” said Joshua Buck, an attorney for the group.

“We are very disappointed, but we are not surprised by today’s decision,” said one of the dealers who attended the hearing. “Wynn has a lot of influence in this town.”

Ironically, in the wake of Steve Wynn’s forced departure earlier this year, Wynn Resorts has rescinded the 2006 policy, restoring to its dealers sole ownership of the casino tip pool along with a small increase in salary. The company maintains, however, that the policy is, and was, legal.

“Our position has always been that the 2018 change in the law rendered the regulation, upon which the dealers base their argument, invalid,” a Wynn spokesman said. “We are encouraged that Judge Jones appears to support our position.”

The dealers have 30 days to ask the Circuit Court to overrule Jones a second time. According to Buck, though, the court won’t hear the case for at least another 18 months, extending a bitter battle, which has gone on for 12 years, into the next decade.