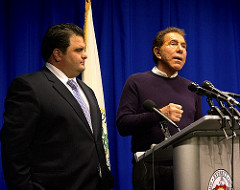 Finishing the Wynn investigation has become an “urgent priority” for the Massachusetts Gaming Commission after almost a year of giving an extreme colonoscopy to the inner workings of Wynn Resorts to determine if that company is allowed to keep its license to operate the $2.5 billion casino resort it is building on the shores of the Mystic River.

Steve Wynn himself is blocking the commission from finishing its investigation of the company because of his lawsuit to keep confidential material that he claims was between him and his attorneys from being released to the public in the commission’s report on the company’s continued suitability to operate a casino now that its founder and former CEO is no longer financially or any other way associated with the firm.

Wynn resigned as CEO and divested himself of all company stock in February, shortly after a Wall Street Journal story detailed the many allegations of sexual misconduct against him over the years, including a $7.5 million settlement to one such accuser. All the while, Wynn has stoutly maintained his innocence of all such accusations.

The Nevada judge in the case, Judge Elizabeth Gonzalez, has granted a preliminary injunction to Wynn to prevent the release until she can hear arguments in the case from both sides on December 13. Wynn’s attorneys argue that many of the details in the investigation’s report come from files that should be considered protected by attorney-client privilege. These files came from a six-year lawsuit between Wynn and a former business partner.

The commission claims it is not interested in the salacious details so much as the question of whether company executives helped cover up those accusations and kept the commission from knowing about them when it was considering the company for its Boston metro license.

The commission originally hoped to adjudicate the issue in September. Now it is looking at later this month.

During last week’s commission meeting, Interim Commission Chairman Gayle Cameron issued this statement: “My fellow commissioners and I are ready to adjudicate this matter, and eager to assess the findings. Identifying a viable way to bring the investigation to a close is an urgent priority.”

She also said, I acknowledge that the commission and its staff are facing a complex set of circumstances and must balance consideration for due process, investigatory requirements, related litigation, and the overall integrity of the process,” adding, “I’m also well aware of the intense and ceaseless effort that has been underway by MGC staff since January.”

Executive Director Edward Bedrosian added, “Absent this litigation, I would have anticipated that the commission would have been in the adjudicatory process at this point.”

The commission has not yet seen any of the material in question because, since they will be acting as judges themselves in the suitability case, they can’t see any of the evidentiary material ahead of time.

Cameron commented, “Both IEB (the Investigations and Enforcement Bureau) and the licensee will hopefully soon present evidence orally or in writing and the commissioners will then have unrestricted opportunity to ask questions of both the IEB and the licensee. Since the commissioners, the four of us, sit as the judges in this adjudicatory proceeding, we must make our decision impartially based solely on the evidence before us. We must not in any way have access to investigations materials prior to the adjudicatory process.”

Wynn shares have taken a beating in the ensuing year since the allegations against the former casino mogul were published. The company’s stock has declined 35 percent in the past 10 months.

While the commission has been pursuing its investigation, mirror efforts have been undertaken by the Nevada Gaming Control Board and the Wynn board of directors, many of whom have come on board since the scandal surfaced.

Should the commission decide to drop the ultimate hammer on Wynn Resorts and withdraw its license, the Mohegan Sun, which originally bid on the license, says it’s willing to step in to save the day.

A representative of the Mohegan Sun, which operates in neighboring Connecticut, said last week: “If that determination finds Wynn Resorts unsuitable to hold a gaming license in Massachusetts, Mohegan Sun is prepared to participate in a process that would assign that license to another operator—and enter into negotiations with the appropriate parties to acquire the facility under construction in Everett.”

The company added the dig that it “always believed it is the best choice as a gaming operator and license holder for a Region A resort casino . . .”

Representatives of the company have already started to talk to the communities around Boston that have impact agreements with Wynn. It has promised to honor all such agreements.

This offer doesn’t sit well with the mayor of Everett, where the casino is rising. Mayor Carlo DeMaria fired off this sally at the Sun: “Mohegan Sun is not welcome to operate a casino in the city of Everett. We made a deal with Wynn Resorts to operate a 5-star international destination resort and I will never accept anything less—certainly not a gaming parlor that would be used to protect their interests in Connecticut at the expense of our community and residents.”