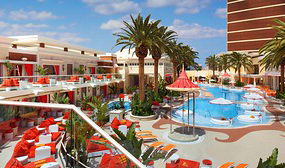 A private bond offering from Wynn Resorts (Beach Club at Encore Las Vegas at left) is aimed at shoring up the company’s finances in the wake of the coronavirus, which has shut down its three U.S. casinos. The company said it’s burning through more than $4 million a day to pay its employees and service its debt.

Wynn Resorts plans to sell $600 million in bonds to keep the gaming giant going through the Covid-19 crisis that has shuttered its three U.S. casinos and ravaged earnings from its operations in Macau.

Las Vegas-based Wynn said it plans to use the proceeds from the private five-year offering for general corporate purposes and to pay related fees and expenses, most of which stem from the fallout from the pandemic.

The company said it is spending around $3.5 million a day to honor a pledge to pay its 15,000 employees through May 15 and another $800,000 a day to cover the interest on portions of its roughly $10.4 billion of long-term debt.

In an SEC filing in conjunction with the bond offering, the company said it had $1 billion in cash available as of mid-March, and since the start of April, had drawn down $50 million from an available $74 million under its revolving credit facility.

The declines of upwards of 44 percent and 88 percent, respectively, were mainly due to truncated results from Wynn’s two Macau resorts, which have been hammered along with the rest of the Macau market since late January by a near-total closing of the border with mainland China, where the virus is believed to have originated.

In February, with the contagion rapidly spreading worldwide, the territory’s 39 casinos were closed for two weeks by order of the local government. They have since reopened, but with individual and group travel from the mainland, their principal feeder market, still suspended, play has been minimal.

According to the filing, the February closure cost the company $2.5 million per day in operating expenses, not counting approximately $500,000 per day in debt service.

“Until (the health safeguards) are lifted, we expect to continue to incur such cash costs in excess of the amounts we are earning at our properties,” the company said.

In the U.S., Wynn’s two Las Vegas Strip resorts were closed on March 17 and will remain shuttered by order of the Nevada Governor’s Office at least until April 30.

Encore Boston Harbor, which opened just last June at a cost of some $2.6 billion, was ordered closed by Massachusetts authorities on May 15 and will remain closed at least until May 4.