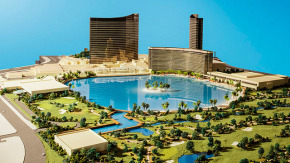 “We’re in the very final stages of getting building permits, and hard construction should start by March and April,” the chairman and CEO of Wynn Resorts said during a conference call with analysts to announce the company’s third-quarter earnings.

He also unveiled an expanded vision for the project, which will be located behind his Wynn and Encore casino hotels. A new carnival-themed attraction will be added, featuring a carousel rotating over a lagoon, electric bumper cars and a nighttime parade with floats in which guests can participate.

Significantly, it also will include a hotel, which was not part of the design as Wynn described it earlier this year. As currently planned, the venue will comprise 1,500 rooms and will feature a casino, restaurants and dedicated convention space.

“We would leave room for everything,” he said on the call, “master plan it, but build at first the park that would immediately power up our existing restaurants, our existing casino, our existing convention meeting and catering operation.”

Zip lines, fireworks shows and other attractions on the boardwalk that surrounds the lagoon also will be part of the mix.

It also will include space for other developers to build as partners.

“We are leaving 40-60 acres on the far east of the project open for development in the future. And we are talking with several applicants or possibilities who already are in negotiations with us.”

The quarter was a banner one the Nasdaq-listed resort giant, whose four casino hotels―Wynn Las Vegas and Encore and Wynn Macau and Wynn Palace in Macau―generated $1.161 billion in net revenues for the 12 weeks ended September 30. The results beat the same period last year by more than $502 million, a 45 percent increase.