HomeThe ShuffleWynn vs. Dealers Back in Federal Court

Wynn vs. Dealers Back in Federal Court 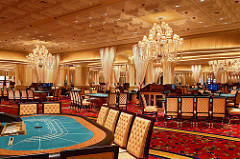 Wynn Resorts hopes the long legal battle over tip-sharing at its two Las Vegas Strip casinos is finally laid to rest this week in a federal courtroom in Las Vegas.

On the other side are some 800 dealers, who have been suing the company for the better part of 12 years, to win a definitive ruling that scraps the policy as illegal and compensates them for the tens of millions of dollars they claim they’ve lost.

Their current suit dates back to 2013 and is based on a Department of Labor regulation which at the time said tips could not be shared with employees who don’t normally receive them, in this case, casino pit bosses and other gaming floor supervisors.

The dealers have been fighting the policy in state and federal court ever since former Wynn Resorts Chairman and CEO Steve Wynn imposed it in 2006, reportedly in a fit of anger after a string of heavy losses to high rollers at Wynn Las Vegas.

Wynn’s policy the traditional positions of supervisors and pit bosses and replaced them with “casino service team leads” who received a fixed salary and a portion of the dealers’ tip pool. Dealers fought back, arguing that the team leads were nothing more than supervisors with a different name.

U.S. District Judge Robert Clive Jones ruled against the dealers in 2014, siding with Wynn that the Department of Labor did not have the power to regulate tip policy. However, his decision was overturned by the 9th U.S. Circuit Court of Appeals. Wynn then appealed to the U.S. Supreme Court.

Since then a lot has happened. In June, the Supreme Court declined to hear the company’s appeal, sending the case back to Jones. But by then, Steve Wynn was long gone, having resigned in disgrace in February after a string of alleged sexual harassment episodes involving female employees came to light. His rising star in the national Republican Party firmament fell with him. A big GOP donor and fund-raiser, he’d been a member of the planning committee for Donald Trump’s inauguration as president and was named vice chairman of finance for the Republican National Committee, a post he had to quit in the wake of the sex scandal.

It wasn’t long after that the Republican-controlled Congress handed him a belated victory when in March it passed a law on employer tip policy that voided the Obama Labor Department’s rule favoring the dealers’ case.

Then, last month, there came another twist when Wynn Resorts scrapped the policy altogether as part of a broad effort following Wynn’s departure to promote a more employee-friendly corporate culture. In exchange, it halved a $2 raise granted the dealers in April and continues to stand by its long-held view that tip-sharing in principle is not illegal.

“Our position is that the March 2018 change in the law rendered the 2011 Department of Labor regulation, upon which the dealers base their argument, invalid,” a company spokesman said.

Accordingly, the company has filed a motion for dismissal which Jones was scheduled to hear this week.

Should he again rule in the company’s favor the dealers have vowed to appeal again to the 9th Circuit.

Said one, “We don’t want a discount.”