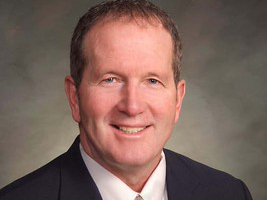 For years, electronic gaming has been operating in Wyoming without an overarching authority to keep operators on the straight and narrow. Lawmakers want to change that by adopting a bill that would create a Wyoming gaming commission. Speaker of the House Steve Harshman (l.) says it’s just “recognizing reality.”

The Wyoming legislature is mulling a bill that would create a Wyoming gaming commission that would take under its wings all of the unregulated games that have proliferated in a Wild West environment that has caused several lawmakers to figuratively exclaim, “Enough!”

Various games, mostly video gaming terminals, have been multiplying at jurisdictions all over the state. Each municipality and county has different interpretations as to what is legal.

“I think it’s recognizing reality,” said Speaker of the House Steve Harshman. “We have dark machines that our attorney general said are illegal—we think a thousand in Wyoming—and we think there might be $800 or $900 million churning in it—maybe $200 million in losses to the playing public. And no way of knowing.”

The bill that is being discussed would allow the gaming commission to create rules under which games could operate legally. But some games would not be regulated until the regulations are written.

Proponents say that regulating the industry will be a good source of revenue for the state.

The gaming company Golden Entertainment argues that the commission shouldn’t have to wait to issue rules because otherwise the games won’t be regulated in the meantime.

Neal Tomlinson, a spokesman for Golden Entertainment, commented, “Going ahead to allow certain types of games is fine. But it should be an orderly process whereby the gaming commission evaluates the machines, licenses the entities and permits each individual machine and certifies those machines and thereby having a level playing field.”