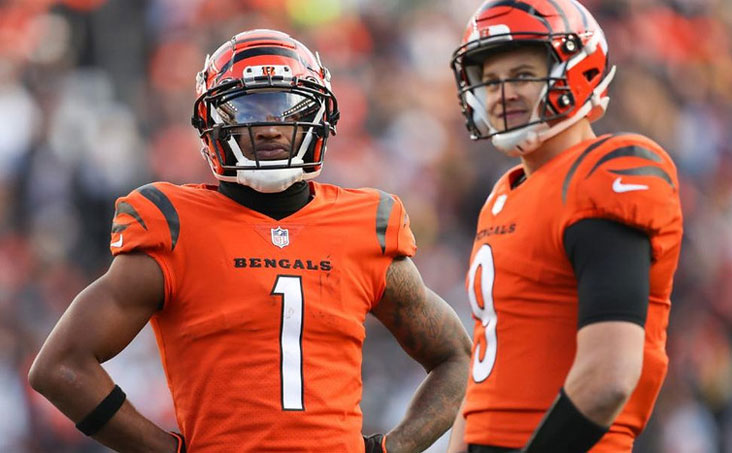 With a championship on the line, which NFL players should you trust? These five stars should be on your betslips.

The Los Angeles Rams team is loaded with veteran talents, many of them household names. The Cincinnati Bengals made their name with gifted young performers who make big plays in critical moments. Which players will dominate in this Super Bowl?

Star power trumps everything in the Big Game, and the following five players are supernovas.

Cincinnati Bengals QB Joe Burrow has gotten to the Super Bowl by passing for a lot of touchdowns. While running back Joe Mixon is one of the league’s best, Burrow will need to throw at least two touchdowns for this team to even have a chance in the game. This should be a pretty safe bet for the Super Bowl MVP hopeful.

Ready for the coin toss? Sign up to wager at Golden Nugget Sportsbook, and you’ll get up to $250 in Free Bets on the Big Game.

In his rookie season, the Bengals have used wide receiver Ja’Marr Chase like the San Francisco 49ers used receiver/runner hybrid Deebo Samuel. Both players are in a lot of end-around handoffs and gadget plays like screens. Chase rushes often for the Bengals. And in a game like the Super Bowl, with a tough defensive opponent in L.A., he figures to get at least a couple attempts. Over 4.5 should be a safe bet as well.

Make your first bet count at BetMGM! Bet exactly $20 on Bengals vs. Rams—or any game—and you’ll score $300 in Free Bets for future wagers. Win or lose!

The Bengals will have to throw the ball a lot in this one, and multiple receiving threats will force L.A. Rams’ star cornerback Jalen Ramsey all over the field. He may not be necessarily targeted much, but Ramsey should have lots of opportunities to make tackles. He shouldn’t have a problem getting to 3.5.

Cincinnati’s offensive line has struggled to protect Joe Burrow in his two-year career, and Rams defensive tackle Aaron Donald might be the best player in the NFL, let alone in the pass rush. Donald might find himself with a couple of sacks in this one, so betting on a single one should yield positive results.

At BetAmerica, you’ll get a 10% Profit Boost when you make your own same-game combo with odds of 200+ or more. Sign up today.

Rams’ wide receiver Cooper Kupp just had one of the best seasons in NFL history, statistically speaking, and the Bengals would be silly to not pay immense attention to him as a result. This has been a theme in the playoffs, and new acquisition wide receiver Odell Beckham Jr. has been the main beneficiary. With most of the attention on Kupp, Beckham has received a lot of targets and has scored a number of key touchdowns for LA. In the one-time superstar’s first Super Bowl, it seems likely that he will gravitate towards the end zone.

These five players have been instrumental in their teams’ journey to the Super Bowl. They will either lead their teammates to a title or go down swinging. Good luck with the props and enjoy Super Bowl LVI!